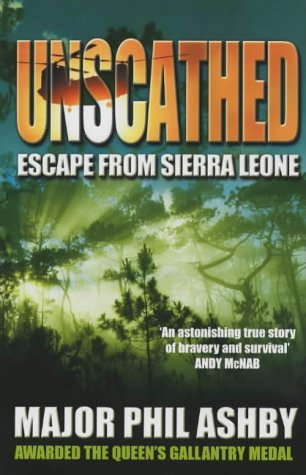 266 pages. Book and Jacket are both in Good condition. There is some light shelf and reading wear, the first blank page is missing, but still a presentable copy. In May 2000 Ashby's Mission As A UN Peacekeeper In War-ravaged Sierra Leone Was Brought To A Violent End.

A truly amazing story of death-defying bravery and escape

Major Phil Ashby already had a reputation for surviving scrapes, where others would - and did - break bones and worse. His strength, resourcefulness and luck had been tested to the full during his career in the Royal Marines' elite Mountain and Arctic Warfare Cadre and various adventurous expeditions. That luck, however, appeared to have run out in May 2000, when he was working for the UN, disarming brutalized rebels in war-ravaged Sierra Leone. When the rebels turned on the UN's representatives, butchering, skinning alive and dismembering several peacekeepers and taking over 500 hostages, it seemed that all was lost and that Ashby and the other two Brits and a Kiwi would perish violently and gruesomely. Instead, Ashby took the decision to die quickly rather than slowly by attempting to escape through rebel lines. They were vastly outnumbered. They were unarmed. Somehow he led his three colleagues on a daring, dramatic escape through hostile jungle. He was awarded the Queen's Gallantry medal for his actions.