Items related to The Mathematical Brain 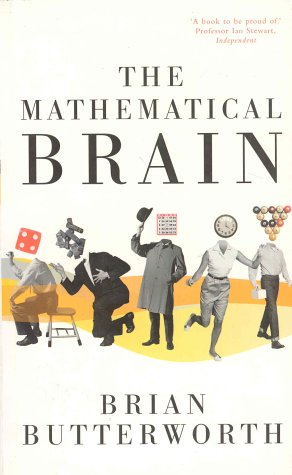 The concept of numbers and the ability to recognize and process them is innate, part of everyone's intellectual apparatus whether they've had formal education or not. This "number instinct" is not dependent on basic intelligence or general knowledge, a fact which has implications for neuroscience and poses the question: why did man evolve with such specialized neural apparatus. It has been that the social development of humans has been crucially affected by language, yet numbers have also been critical in the advancement of human culture. Every child goes through a stage of learning to count using their ten fingers, much as early Homo Sapiens must have done. If number learning is a natural and universal function of the brain, why do so many suffer from dyscalculia? This text, containing theories and anecdote, is an investigation into the bizarre world of numbers. It examines the role of education, good or bad, in the development of mathematical disorders.

At first glance, neuropsychologist Brian Butterworth's The Mathematical Brain might infuriate mathsphobes who insist that they just can't get a handle on numbers. Could it be true that natural selection produced brains preprogrammed with multiplication tables? Read a few pages, though, and you'll see that Professor Butterworth has more than a little sympathy for the arithmetically challenged, and indeed confesses that he too has a hard time with figures. His thesis isn't that we are born doing mathematics, but that we are born with a faculty for learning mathematics, much like our ability to learn language. He goes on to argue that unique individual differences in this faculty combine with our educational experiences to make us either lightning calculators or klutzes who can't work out the right tip.

Butterworth's style is perfect for his subject, seamlessly weaving scholarly analysis with down-to-earth humour and practical examples that will satisfy the researcher and the lay reader alike. Drawing on archaeology, anthropology, linguistics, and his own neuropsychology, he makes his case like a masterful attorney while remaining careful to leave room for scientific falsification. The history of counting is engrossing and will be new to many readers, as it has been a rather arcane field until recently--but it's just one of the many new vistas opened for the readers of What Counts. -- Rob Lightner, Amazon.com

Recent paperback reviews:
'[Brian Butterworth's] invigorating book fleshes out an idea that number knowledge is innate and universal, a basic capability to be ranked alongside seeing and feeling... Butterworth's book is itself the perfect panacea for anyone to whom maths is a distant or unpleasant memory. Despite its complexities, he handles his subject matter with great deftness and good humour, while his argument sweeps in epic style from mathematical habits around the globe to the inner working of the brain's hemispheres.' Ludovic Hunter-Tilney, FINANCIAL TIMES 25th March 2000

'Numbers, their human psychology and cultural history. Restores to numerals - those Indo-Islamic signs the medieval west adopted to record transactions computed on the abacus - a depth of character and long back-stories. Four, eight and nine have dark meaningful pasts, 60 acquired in Babylon its power over the division of time and angles of space and thus over the dimensions of the known universe; the total sum of the Yupno of Papua New Guinea, who figure by naming body parts in sequence, is 33, signifying the penis (Yupno women dont' count). Mega.' THE GUARDIAN 25th March 2000