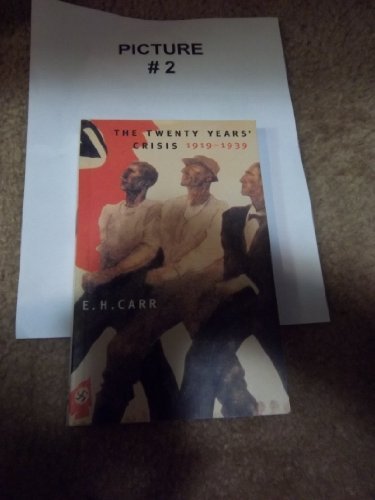 This text is a study of the period between the two World Wars. Written on the eve of World War II, it deals with war and peace and the conduct of international affairs. Its framework was topical - illustrations were drawn from the events of the day. But 40 years later its insights and arguments have not lost their relevance. Even the glimpses of the future in the last chapter have not been thrown entirely out of focus by the very different shape which the world has since assumed.

." . . this book is a monument to the human power of sane and detached analysis. In its examination of the collapse of the international system, it is utterly devoid of national bias, or that bitter denunciation of governments and men which marks so much recent literature dealing with the crisis.... In the development of his thesis, Professor Carr has produced one of the most significant contributions to the systematic study of the theory of international politics that this reviewer has seen in years."-- W. P. Maaddox "The American Political Science Review""To take [the author's] work at his own evaluation of it, it would make an admirable introductory text for any college course in diplomatic history or international relations. It deserves wider and more practical attention. A wiser commentary on why the nations were at war, a more fruitful suggestion for the peacemakers, has yet to be written."-- A. W. Griswold, "The"

E.H. CARR who died in 1982 at the age of ninety was a Fellow of Trinity College, Cambridge, UK, and an Honorary Fellow of Balliol College, Oxford, UK. His books include International Relations between the Two World Wars 1919-1939, The Twenty Years' Crisis 1919-1939, Nationalism and After, The New Society, What is History?, 1917: Before and After, Michael Bakunin, The Russian Revolution From Lenin to Stalin 1917-1929, the fourteen volume History of Soviet Russia and The Twilight of the Comintern 1930-1935.

MICHAEL COX is Professor of International Politics at University of Wales, Aberystwyth and editor of the Review of International Studies. His most recent publications include The Eighty Years' Crisis: International Relations 1919-1999 (1998) and E.H. Carr: A Critical Reappraisal (2000).

1. The Twenty Year's Crisis, 1919-1939: An Introduction to the Study of International Relations