Items related to Germany and the Approach of War in 1914 (Making of...

Berghahn, V.R. Germany and the Approach of War in 1914 (Making of the Twentieth Century) 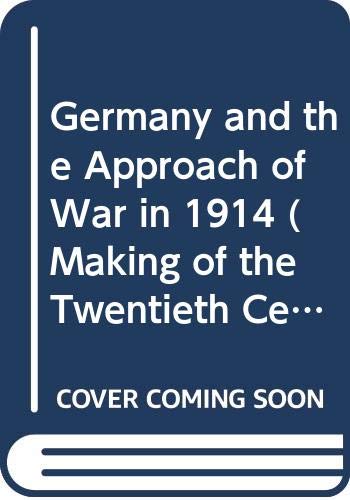 This edition has a new introduction and a revised first chapter to incorporate recent perceptions and arguments on the basic character of the Kaiserreich that emerged especially during the 1980s. The basis of this study by V.R. Berghahn is his contention that the years immediately preceding World War I saw the genesis and collapse of the precise and ambitious plan to secure for Germany "a place in the sun" in the 20th century. The author begins with an analysis of German Weltpolitik and naval expansion, and of the domestic roots of this policy, with its implications for the European balance of power. He then discusses how the original ambitions, which were designed to preserve and stabilize an outmoded political structure within Germany, were checked by other powers. Britain's role here is seen as being of special importance - from 1905 onwards she engaged the Reich in a naval arms race which it was beyond the capacity of the German monarchy to sustain. Taking account of the "Fischer controversy" on Germany's war aims, and of new material on internal and external policies of the Wilhelmine period, this should be a valuable study for students of modern history and of the origins of