German Writers and Politics, 1918-39 (Warwick Studies in the European Humanities)

German Writers and Politics, 1918-39 (Warwick Studies in the European Humanities) 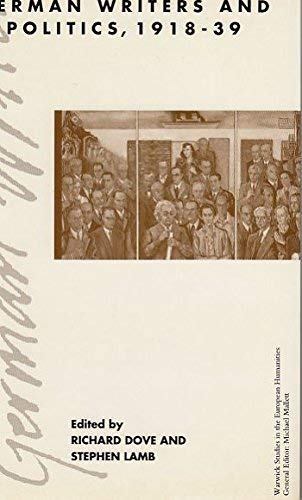 Political changes between 1918 and 1939 had important implications for German writers. The essays in this volume focus on questions such as writers' relationship to political parties and ideology, their treatment of the legacy of the World War I, their response to the rise of fascism, both in the Weimar Republic and exile, the nature and role of "militant humanism", and involvement in the Spanish Civil War. Writers evaluated include Klaus, Heinrich and Thomas Mann, Brecht, Remarque, Seghers, Toller, Tucholsky and Stefan Zweig.

2. German Writers and Politics, 1918-39 (Warwick Studies in the European Humanities)

Book Description Palgrave Macmillan, 1992. Condition: Good. Ships from the UK. Former Library book. Shows some signs of wear, and may have some markings on the inside. Seller Inventory # GRP107129486

3. German Writers and Politics, 1918-39 (Warwick Studies in the European Humanities)