Items related to The Success of Competitive Communism in Japan

Kenrick, Douglas Moore The Success of Competitive Communism in Japan

The Success of Competitive Communism in Japan 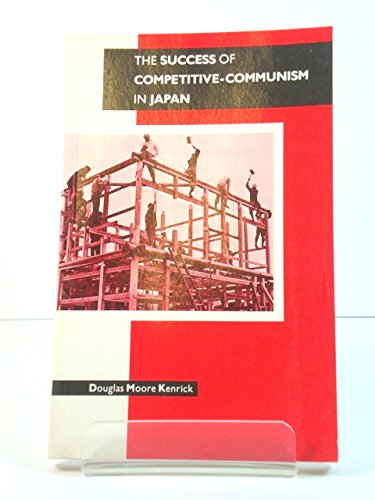 For centuries Japan, although a totalitarian dictatorship, was ruled by figureheads who signed laws formulated "behind the screen". Hierarchy still defines everyone's status. The man at the top has power but jeopardizes his position if he ignores consensus opinions. Nowadays fashionable 20th-century clothing cloaks a contradictory blend of intense competition with a tradition of harmony dependent on close human-relations and complex communal restraint. The Japanese organize themselves in cliques (not groups) which raise barriers against outsiders. Companies are controlled from within - shareholders are outsiders. Women are more than equal in their homes - less than equal at work. After living and managing his own business in Japan for 40 years, the author explored widely before coining the term "competitive communism" to describe Japan's economic and social system.

1. The Success of Competitive-Communism in Japan

2. THE SUCCESS OF COMPETITIVE-COMMUNISM IN JAPAN.

3. The Success of Competitive-communism in Japan

Book Description Palgrave Macmillan, 1988. Condition: Good. A+ Customer service! Satisfaction Guaranteed! Book is in Used-Good condition. Pages and cover are clean and intact. Used items may not include supplementary materials such as CDs or access codes. May show signs of minor shelf wear and contain limited notes and highlighting. Seller Inventory # 0333457269-2-4