Items related to Death of a Salesman (Text & Performance S.) 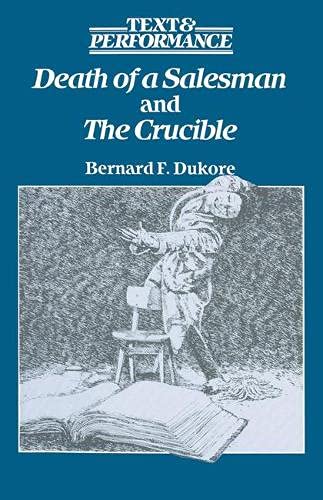 An examination of two of America's best-known plays. Part 1 revolves around the key aspects of the plays' relationship to America, and in Part 2 special emphasis is placed on the Broadway productions of "Death of a Salesman" in 1949 and the 1953, 1965 and 1980 productions of "The Crucible".

Book Description Hardback. Condition: Good. The book has been read but remains in clean condition. All pages are intact and the cover is intact. Some minor wear to the spine. Seller Inventory # GOR003138769

Book Description Hardback. Condition: Fair. A readable copy of the book which may include some defects such as highlighting and notes. Cover and pages may be creased and show discolouration. Seller Inventory # GOR002843599

3. Death of a Salesman (Text and Performance)

Book Description Palgrave Macmillan, 1989. Paperback. Condition: Used; Good. **Simply Brit** Shipped with Premium postal service within 24 hours from the UK with impressive delivery time. We have dispatched from our book depository; items of good condition to over ten million satisfied customers worldwide. We are committed to providing you with reliable and efficient service at all times. Seller Inventory # 1312978

Book Description Paperback. Condition: Very Good. The book has been read, but is in excellent condition. Pages are intact and not marred by notes or highlighting. The spine remains undamaged. Seller Inventory # GOR002418391

5. Death of a Salesman and The Crucible. Text and Performance

Book Description Mamcillan Education, Great Britain, 1989. Soft Cover. Condition: Good. 1st Paperback Edition. Paperback. Underlining in pen to some pages. Slight mark to Contents page. Bernard F. Dukor analyses these plays, which are very linekly the best work of a man commonly considered one of America's major dramatists, in contexts of their American roots, literary features, and production. In Part One, discussion revolves around such key aspects as the plays' relationship to America past, present, and as idea; their language, characterization, and structure; and the extent of their klinship with tragedy. part Two focuses upon the text of these plays in performance - under the categories of Direction, Scenery and Lighting, and Acting - with a special emphasis on the Broadway productions of Death of a Salesman in 1949 and 1984 (the latter reproduced on CBS television a year later), on the Broadway production of The Crucible in 1953, and on the National Theatre productions of The Crucible in 1965 and 1980. 108 pp. (We carry a wide selection of titles in The Arts, Theology, History, Politics, Social and Physical Sciences. academic and scholarly books and Modern First Editions ,and all types of Academic Literature.) Size: 8vo - over 7ľ" - 9ľ" tall. Paperback. Seller Inventory # 089233

7. DEATH OF A SALESMAN AND THE CRUCIBLE: TEXT AND PERFORMANCE.