Items related to William the Good 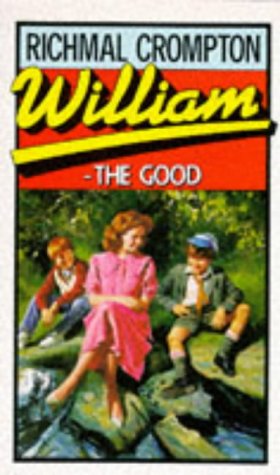 Clarence Bergson had the audacity to attack an innocent dog (owner, one William Brown), inform on William's band of Outlaws and worst of all befriend Miss Holding (the girl of William's dreams). That called for retribution and justice.

Now with a fantastic redesigned cover to tie in with the brand-new JUST WILLIAM BBC television series!

Richmal Crompton was born in Lancashire in 1890. The first story about William Brown appeared in home magazine in 1919, and the first collection of William stories was published in book form three years later. In all, thirty-eight William books were published, the last one in 1970, after Richmal Crompton’s death

Book Description Macmillan Children's Books, 1984. Paperback. Condition: Used; Good. Dispatched, from the UK, within 48 hours of ordering. This book is in good condition but will show signs of previous ownership. Please expect some creasing to the spine and/or minor damage to the cover. Damaged cover. The cover of is slightly damaged for instance a torn or bent corner. Aged book. Tanned pages and age spots, however, this will not interfere with reading. Seller Inventory # CHL4533377

Book Description Paperback. Condition: Very Good. The book has been read, but is in excellent condition. Pages are intact and not marred by notes or highlighting. The spine remains undamaged. Seller Inventory # GOR001599654

Book Description Macmillan Children's Books, 1984. Mass Market Paperback. Condition: Used; Good. **Simply Brit** Shipped with Premium postal service within 24 hours from the UK with impressive delivery time. We have dispatched from our book depository; items of good condition to over ten million satisfied customers worldwide. We are committed to providing you with reliable and efficient service at all times. Seller Inventory # mon0000273808

Book Description Macmillan Children's Books 15/11/1984, 1984. Condition: Very Good. Shipped within 24 hours from our UK warehouse. Clean, undamaged book with no damage to pages and minimal wear to the cover. Spine still tight, in very good condition. Remember if you are not happy, you are covered by our 100% money back guarantee. Seller Inventory # 6545-9780333373934

Book Description Macmillan Children's Books 15/11/1984, 1984. Condition: Good. Will be shipped promptly from UK warehouse. Book is in good condition with no missing pages, no damage or soiling and tight spine. There may be some dog-eared pages showing previous use but overall a great book. Seller Inventory # 9053-9780333373934

Book Description Macmillan Children's Books, 1984. Mass Market Paperback. Condition: Used; Good. **SHIPPED FROM UK** We believe you will be completely satisfied with our quick and reliable service. All orders are dispatched as swiftly as possible! Buy with confidence!. Seller Inventory # mon0001418092

Book Description -. Mass Market Paperback. Condition: Very Good. William the Good This book is in very good condition and will be shipped within 24 hours of ordering. The cover may have some limited signs of wear but the pages are clean, intact and the spine remains undamaged. This book has clearly been well maintained and looked after thus far. Money back guarantee if you are not satisfied. See all our books here, order more than 1 book and get discounted shipping. Seller Inventory # 7719-9780333373934