Items related to The Rules of Sociological Method: And selected texts...

Durkheim, Emile The Rules of Sociological Method: And selected texts on sociology and its method (Contemporary social theory)

The Rules of Sociological Method: And selected texts on sociology and its method (Contemporary social theory) 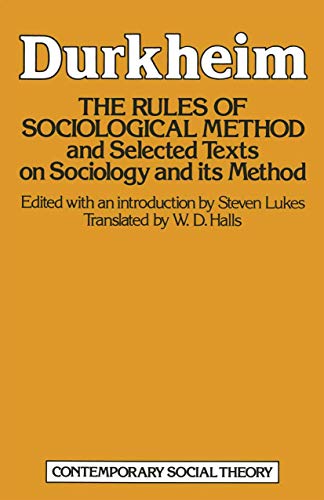 Revised for the first time in over thirty years, this edition of Emile Durkheim's masterful work on the nature and scope of sociology is updated with a new introduction and improved translation by leading scholar Steven Lukes that puts Durkheim's work into context for the twenty-first century reader. The Rules of Sociological Method represents Emile Durkheim's manifesto for sociology. He argues forcefully for the objective, scientific, and methodological underpinnings of sociology as a discipline and establishes guiding principles for future research. The substantial new introduction by leading Durkheim scholar Steven Lukes explains and sets into context Durkheim's arguments. Lukes examines the still-controversial debates about The Rules of Sociological Method's six chapters and explains their relevance to present-day sociology. The edition also includes Durkheim's subsequent thoughts on method in the form of articles, debates with scholars from other disciplines, and letters. The original translation has been revised and reworked in order to make Durkheim's arguments clearer and easier to read. This is an essential resource for students and scholars hoping to deepen their understanding of one of the pioneering voices in modern sociology and twentieth-century social thought.

"With this improved and expanded edition, The Rules of a Sociological Method, has finally been given the scholarly treatment it deserves. And the Editor's Introduction--written with Steven Lukes's usual flair and erudition--provides an essential guide to the book's original historical context as well as to its lasting sociological importance."--David Garland "New York University "

Emile Durkheim (1858-1917) was a French sociologist who formally established the academic discipline and, with Karl Marx and Max Weber, is commonly cited as the principal architect of modern social science. Steve Lukes is a professor of sociology at New York University. An emeritus Fellow of the British Academy and an editor of the European Journal of Sociology, he is the author of Emile Durkheim: His Life and Work and, most recently, Moral Relativism.

The Rules of Sociological Method: And selected texts on sociology and its method (Contemporary Social Theory) Durkheim, Emile and Lukes, Steven