Items related to The Illusion of Peace: International Relations in Europe...

Marks, Sally The Illusion of Peace: International Relations in Europe 1918-1933 (Making of the Twentieth Century)

The Illusion of Peace: International Relations in Europe 1918-1933 (Making of the Twentieth Century) 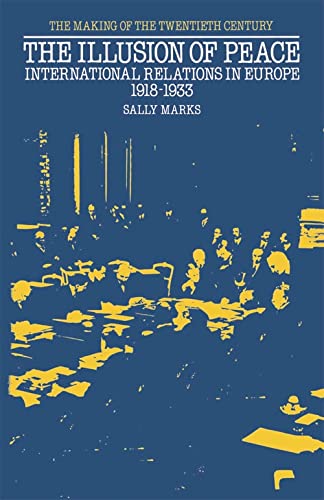 Sally Marks provides a compelling analysis of European diplomacy between the First World War and Hitler's advent. She explores in clear and lively prose the reasons why successive efforts failed to create a lasting peace in the interwar era. Building on the theories of the first edition - many of which have become widely accepted since its publication in 1976 - Marks reassesses Europe's leaders of the period, and the policies of the powers between 1918 and 1933, and beyond.

Strongly interpretative and archivally based, The Illusion of Peace examines the emotional, ethnic, and economic factors responsible for international instability, as well as the distortion of the balance of power, the abnormal position of the Soviet Union, the weakness of France and the uncertainty of her relationship with Britain, and the inadequacy of the League of Nations. In so doing, the study clarifies the complex topics of reparations and war debts and challenges traditional assumptions, concluding that widespread western devotion to disarmament and dedication to peace were two of several reasons why democratic statesmen could not respond decisively to Hitler's threat. In this new edition Marks also argues that the Allied failure to bring defeat home to the German people in 1918-19 generated a resentment which contributed to interwar instability and Hitler's rise.

This highly successful study has been thoroughly revised and updated to reflect the latest scholarship. Now in its second edition, it remains the essential introduction to the tense political and diplomatic situation in Europe during the interwar years.

'The Illusion of Peace figures as a model of international history. It stands without peer as the best synthesis of the period between the Treaty of Versailles and the rise of Hitler. Students, as well as professional historians, loved the original book. The fully up-to-date, revised edition should become an indispensable text for courses on Twentieth-century diplomacy.' - Stephen A. Schuker, University of Virginia

'This is a most welcome second edition. Sally Marks has skilfully
incorporated the findings of new research into her original authoritative text, offering students clear and well-judged historical explanations and a
comprehensively updated bibliography. This remains the best overview of the
1920s, the years that became, but need not have been, The Years of
Illusion.' - Alan Sharp, University of Ulster

'I am delighted to see a second edition of The Illusion of Peace. It is an especially valuable book for teaching, since it provides a succinct and lucid overview of international relations before the rise of Hitler. It is informed by the latest scholarship and written in a style that is both accessible and witty. Sally Marks' controversial thesis that the Germans were the only ones who knew what they wanted and were determined to get it continues to stimulate historical discussion.' - Peter Kent, Professor of History, University of New Brunswick

'Extensive knowledge, sound historical judgment, felicitous prose, and the
courage to debunk myths make Sally Marks one of the best historians of
international relations of this generation. With wide vision and a keen focus on power, this second edition of The Illusion of Peace peers behind the illusions of interwar diplomacy to analyze the erosion of European strength in the world and of French predominance over Germany on the European continent.' - Joel Blatt, University of Connecticut

'Sally Marks has the historical debates at her fingertips, and she writes with clarity, verve and wit. This revised edition of The Illusion of Peace draws on the research of the last quarter-century, and deserves the widest possible readership.' - Philip Bell
'Useful update of a classic text.' - Dr Patrick Finney, University of Wales, Aberystwyth

Review of the first edition:

'[Marks] tells an interesting story well but, in addition, she provides an analysis of the narrative and an interpretation of why the 'Western' leaders failed in their attempt to achieve the reality of peace....Taken all round it is a good textbook for students of history and international relations and also those reading politics.' - NATFHE Journal

SALLY MARKS is Professor Emerita of Rhode Island College. She is the author of Innocent Abroad: Belgium at the Paris Peace Conference of 1919 (1981) which won the American Historical Association's George Louis Beer Prize in International History and the Phi Alpha Theta Senior Scholar Award, and The Ebbing of European Ascendancy: An International History of the World, 1914-1945 (2002).

1. THE ILLUSION OF PEACE: INTERNATI