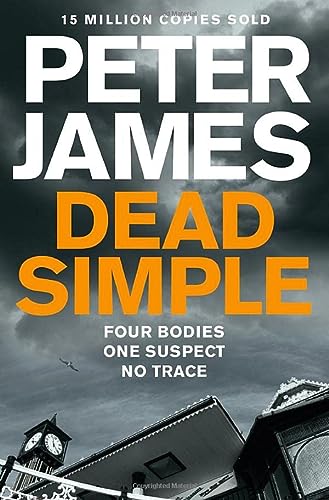 It was meant to be a harmless stag night prank. A few hours later four of his best friends are dead and Michael Harrison has disappeared. With only three days to the wedding, Detective Superintendent Grace - a man haunted by the shadow of his own missing wife - is contacted by Michael's beautiful, distraught fiancée, Ashley Harper. Grace discovers that the one man who ought to know Michael Harrison's whereabouts is saying nothing. But then he has a lot to gain - more than anyone realizes. For one man's disaster is another man's fortune... Dead simple... 'James has got the gift for turning mind-stretching subjects into novels that are irresistibly readable as well as utterly believable' Robert Goddard 'A brilliant idea, superbly crafted. A terrific page-turner' James Herbert

'This is the first in a new crime series which promises to be both fascinating and destined for the bestsellers.' --Independent on Sunday

This brief note is to tell you little bit about my new novel DEAD SIMPLE and a character – drawn from real life police officer I know – who I have been developing for several years.

I have been addicted to stories featuring the great detectives of fiction since I was a child, from Sherlock Holmes and Philip Marlowe through to Morse and Rebus. To me all these great characters are compelling not so much because they are brilliant at solving crimes, but because they succeed despite their flaws. They have weakness and fallibility, just like all of us ordinary folk.

In DEAD SIMPLE my central character, Detective Superintendent Roy Grace is such a man. He is brilliant at fighting crimes that happen to others, yet unable to solve the mystery of his wife who vanished into thin air nine years ago. And he is unable to resist resorting to mediums for help in his police work despite the risk to his career prospects from his sceptical chief.

I hope you will enjoy reading the first adventure of Roy Grace as much as I have enjoyed creating him and writing the book.