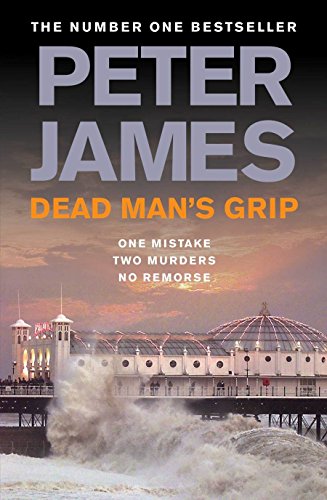 Sometimes authors can mount an all-guns-blazing, full-frontal assault on the bestseller charts, achieving success by bludgeoning their way to the top, utilising well worn, unchallenging methods that can always be guaranteed upon to achieve crowd-pleasing results. But there is another approach, and it is the one adapted by the talented Peter James. By the straightforward expedient of using carefully crafted, well honed narratives with a strong sense of place and a sure grasp of character, James has slowly but surely worked his way towards an almost unassailable position as one of Britain's best-loved crime writers. That sense of place, of course, is located in Brighton, the increasingly fashionable setting just an hour's train journey from London, and over the course of his novels, James is proving to be as adroit chronicler of that town as Graham Greene in Brighton Rock (although James has yet to write a novel quite as intense as Green's masterpiece -- a fact that he would no doubt admit, as Greene's novel is a particular favourite of Peter James). And the character that James locates here is his tenacious copper Roy Grace (shortly to be incarnated in a long-overdue television series). Dead Man's Grip is a particularly gripping entry in the Grace series, although to say that it is not massively different from other books in the sequence is simply to note that James has shown a remarkable consistency over all the Roy Grace books.

Here the detective is involved in dark developments after a young woman is traumatised in a fatal traffic accident. The accident has resulted in the death of student – but then the drivers of other vehicles involved are discovered tortured and killed.

The fact that Peter James has built up considerable storytelling skills over the years is hardly an accident; had he not written a single Roy Grace novel, he would, of course, be remembered for a series of highly professional supernatural outings (recently reissued with covers that rather cheekily suggested the books are like his more recent work). But his most signal achievement is to keep us comprehensively engaged in the increasingly overfamiliar field of the police procedural. Not an easy task, but one that James pulls off with aplomb. --Barry Forshaw

"Possibly the most engrossing thriller since "The Silence of the Lambs."" --"Washington Post Book World"

"A terrific thriller . . . "Dead Like You" is a haunting page-turner that seamlessly blends psychological suspense with police procedure, echoing the heart and voices of such authors as P. D. James and Ian Rankin at their best." --Jeffery Deaver
"Peter James creates worlds as familiar as your backyard, but doubly spicy, smart, and entertaining. Danger and drama leap from every page, as the master delivers precisely what every reader wants: plenty of sizzle and emotional clout. "Dead Like You "makes for a terrific read. Don't miss this one." --Steve Berry

"U.S. readers deserve to know what the rest of the world has known for years--Peter James is one of the best crime writers in the business." --Karin Slaughter, New York Times bestselling author of BROKEN and UNDONE