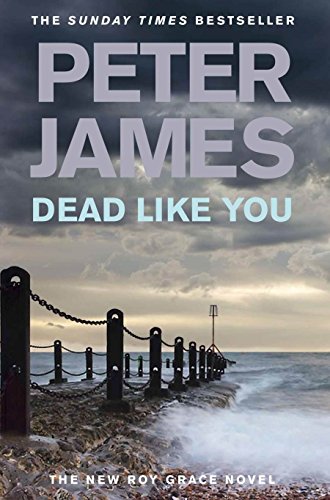 Peter James is taking over the world -- or at least the crime fiction part of it. Dead Like You, the latest instalment in his increasingly popular series featuring Brighton detective Roy Grace, has sold even more spectacularly than its predecessors, keeping crime heavyweights James Patterson and John Grisham from the number one slot in the UK bestseller lists. And after lengthy delays, the long-awaited television series is to be made -- a series that will no doubt make Grace's stamping ground of Brighton as familiar as Inspector Morse's Oxford. So what is the secret of the James/Grace success? It's simple: over many years and many books, James has refined his storytelling skills to the nth degree and has the full measure of the classic police procedural narrative. In the new book, Brighton's Metropole Hotel is the scene of an unpleasant incident: a woman is savagely raped when she enters a room. Some days later, another woman is similarly assaulted -- both have their shoes stolen by the offender. Assigned to the case, Detective Superintendent Grace becomes aware that these two incidents have disturbing echoes of a sequence of crimes that shook Brighton in 1997. The rapist (who had been described as ‘Shoe Man’) claimed five victims, the last of which he had murdered before disappearing. Grace is faced with two unpleasant possibilities; that the original Shoe Man who cheated justice 10 years ago has returned to wreak havoc again, or -- equally disturbingly -- there is a copycat at work.

The growing army of admirers for James’ Grace books will be well aware of the mystery surrounding the disappearance of the detective’s wife, Sandy -- a disappearance that James has allowed to remain enigmatic. The narrative of Dead Like You plays on that intriguing plot strand, as Grace is obliged to travel back mentally to a time when he was happily married in order to discover how he can defeat a monster in the present. This is one of Peter James’s longest books, weighing in at nearly 600 pages, but aficionados will find that it is not a page too long. --Barry Forshaw

'James is to be commended for producing an insider's view of a rape investigation, in this gripping novel about a desperately serious subject.' --Culture Magazine, Sunday Times

'If you have a taste for an intelligent well written tale of contemporary detection you could do no better... As usual, Peter James's work is brilliantly researched beautifully written and guaranteed to get your heart pumping.' --Sunday Express

'Peter James, with Dead Like You, and his detective Roy Grace artfully weaving through a complex yet utterly gripping plot, showed us why he deserved that No 1 bestseller slot.' --Daily Mirror

Book Description Condition: Very Good. This book is in very good condition and will be shipped within 24 hours of ordering. The cover may have some limited signs of wear but the pages are clean, intact and the spine remains undamaged. This book has clearly been well maintained and looked after thus far. Money back guarantee if you are not satisfied. See all our books here, order more than 1 book and get discounted shipping. . Seller Inventory # 7719-9780330456791

Book Description Condition: Very Good. Shipped within 24 hours from our UK warehouse. Clean, undamaged book with no damage to pages and minimal wear to the cover. Spine still tight, in very good condition. Remember if you are not happy, you are covered by our 100% money back guarantee. Seller Inventory # 6545-9780330456791

Book Description Paperback. Condition: Used; Good. **Simply Brit** Shipped with Premium postal service within 24 hours from the UK with impressive delivery time. We have dispatched from our book depository; items of good condition to over ten million satisfied customers worldwide. We are committed to providing you with reliable and efficient service at all times. Seller Inventory # BB00058352B

Book Description Paperback. Condition: Used; Good. **SHIPPED FROM UK** We believe you will be completely satisfied with our quick and reliable service. All orders are dispatched as swiftly as possible! Buy with confidence! Greener Books. Seller Inventory # mon0001596488

Book Description Paperback. Condition: Good. A tan to the page edges/pages . Minor shelf wear Good condition is defined as: a copy that has been read but remains in clean condition. All of the pages are intact and the cover is intact and the spine may show signs of wear. The book may have minor markings which are not specifically mentioned. Most items will be dispatched the same or the next working day. Seller Inventory # wbb0020238950

Book Description Paperback. Condition: Good. The book has been read but remains in clean condition. All pages are intact and the cover is intact. Some minor wear to the spine. Seller Inventory # GOR002162884

Book Description Paperback. Condition: Fair. A readable copy of the book which may include some defects such as highlighting and notes. Cover and pages may be creased and show discolouration. Seller Inventory # GOR002315244

Book Description Paperback. Condition: Used; Very Good. Dispatched, from the UK, within 48 hours of ordering. Though second-hand, the book is still in very good shape. Minimal signs of usage may include very minor creasing on the cover or on the spine. Seller Inventory # CHL1381626