Items related to Energy Flash: A Journey Through Rave Music and Dance...

Energy Flash: A Journey Through Rave Music and Dance Culture 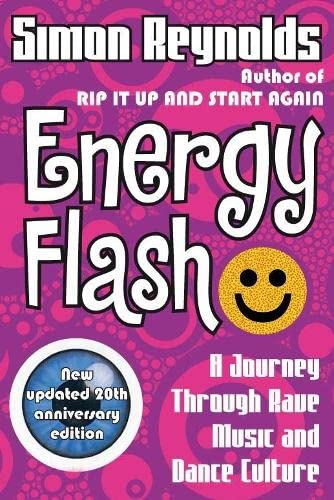 Twenty years since acid house and Ecstasy revolutionized pop culture, here’s the expanded and updated version of Simon Reynolds’ landmark history of rave. Containing substantial new material covering dance-music developments in the ten years since its original publication, Energy Flash is now even more definitive. Blending vivid reporting, probing research and passionate opinion in the style of his acclaimed post-punk history Rip It Up and Start Again, Reynolds guides the reader on a thrilling journey from the druggy daze of Ibiza and Madchester via London’s gritty pirate-radio culture of jungle and garage to the elegantly wasted clubland of contemporary Berlin. From trance to 2step, microhouse to grime, electro to dubstep, Reynolds tracks the scenes and sounds that have kept electronic music at the vanguard of pop culture. Now more essential and authoritative than ever, Energy Flash is the classic chronicle of rave’s quest for the perfect beat and the ultimate rush.

'...definitive history of rave and what followed has now been updated...guide to the soundtrack to endless nights of ecstasy.' -- Observer Music Monthly

'...manages to chronicle how rave culture coalesced into being...for the subject is apparently inexhaustible and enjoyably infectious.'
-- The Guardian

'A classic chronicle of the Nineties rave movement . . . Striking and well-reported' -- Rolling Stone

'An exceptional book. Reynolds has tracked the unfolding sounds and rituals of ''the (al)chemical generation'' so comprehensively that he virtually obviates the need for any further literature on the period' -- Mojo

'Crucially, Reynolds concentrates every bit as much on the music itself... as on the culture of people, places and events...as fascinating and informative as it is enthusiastic and entertaining'
-- Q

'enthusiasm, passion and knowledge . . . seeps out of every page' -- The Face