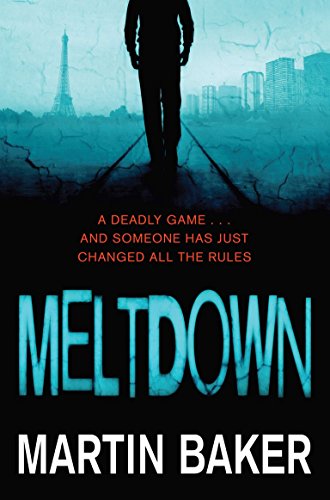 Samuel Spendlove, one of the brightest young academics at Oxford, has given it all up to work undercover for William Barton, owner of a massive media empire. His reasons are complicated, but he’s finding he gets a thrill out of working for Khan, the legendary market trader, working out of the Paris office of Ropner’s Bank, whose dealings have been known to bring nations to their knees. Barton wants information about Khan. He wants revenge over a man who has bested him once. Spendlove assumes he wants to ensure it is only the once . . .

Spendlove enjoys both sides of this game, until it all unravels and he finds himself simultaneously accused of almost bringing down the global economy and of the murder of Kaz Day, a glamorous colleague on the trading floor. He goes into hiding in the surreal and dangerous world of underground Paris chased by the police, by Khan, the bank and William Barton . . . and helped by Kaz's bi-curious lover, Lauren. But who framed him and why?

'A helter-skelter story that moves at the pace of a cheetah on speed...'
-- Material Witness

'A sophisticated thriller about money, power and obsession, set in the cut-throat world of financial high-flyers.' -- Evening Echo

'Baker could have a future as a thriller writer.' -- Mail on Sunday

'Books that attempt to convey the atmosphere of a City trading floor and succeed are extremely rare...'
-- Evening Standard

'Like all good thriller writers, Martin Baker knows how to pander to the prejudices of his readers...' -- Mail on Sunday

'Martin Baker's first thriller is an eye-opener about the world of financial high-flyers...' -- Irish Independent

'This is exciting stuff. Vengeance and money are powerful stimulants...'
-- The Resident & The Grove

Splendid, fast-moving stuff, in which the stakes move from personal vendettas to nothing less than a threat to the global economy - all pulled off with real skill.
-- Barry Forshaw, The Good Book Guide

First of all apologies to those of you who were the possibly reluctant recipients of a proof copy of my novel, Meltdown. No book pleases everybody, and in an age where we're all saturation-bombed by information, I fully understand if this was just too much of it.

The proofs were sent out in a spirit of trying to find out what readers actually like. I intend to treat you as critics, so I doubt I shall ever exercise my right of reply. The book is supposed to be an entertainment (one dreams vainly of Graham Greene at such a point) with a serious point to it. The idea is to tell the truth about the financial world that underpins the "real" world we live in through the medium of fiction. To put matters in context, here's a chunk of the acknowledgements that will go into the first edition. I believe it addresses some of the issues raised on the website:

"This manuscript has taken over a decade in the research and writing. It has been through thirteen versions, passed through many hands, and been the beneficiary of critical opinions far sharper and more distanced and objective than my own.

Before I get to what is necessarily a long litany of heartfelt gratitude, let me explain the system analysis of Meltdown. It is fiction. Absolutely none of the characters is real, other than the occasional historical or political figures who do not drive the plot. So former UK foreign minister Douglas Hurd, the subject of one casual allusion, is real. Samuel Spendlove, Khan, Miller, Kaz, Lauren, Diaz, Nobby, FT, Barton, McMurray et al are most definitely fictional, and not based on any real person.

The action takes place in the near future, and the financial backdrop is rooted in reality. Samuel is perhaps given his head a little early at Ropners Bank, but the technical data is, so far as I have been able to make it, the real thing. The IT background that allows Samuel semi-secret access to the internet is, I think, just about viable, but is realistic rather than real. And Gallimard, the object of Barton's covetousness, is not, of course independently quoted. Nor is there any suggestion that there has ever been any impropriety in any of its financial dealings, so far as I am aware. It is merely an illustrious and rightly admired publishing house which, were it ever to come to the open market, might well inspire the kind of dogfight that is the background to Meltdown."

Regards and thanks to you all,