Items related to Read Me Out Loud: A Poem to To Rap, Chant, Whisper... 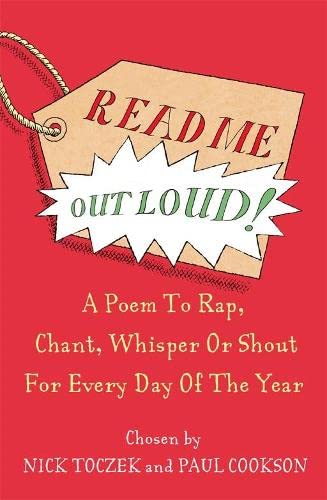 Read Me Out Loud contains a poem for every day of the year from the very best modern and classic poets. There are raps, performance poems, chants, playground rhymes, action verses, poems to join in with, choral poems, poems from different cultures, monologues, dialogues, poems for a series of voices, songs, playlets, loud poems and quiet poems, poems with sound effects and poems with actions – you can read them any way you want as long as it is OUT LOUD!

Paul Cookson spends most of his time visiting schools, performing his poetry and helping children to write their own poems. He is also a freelance illustrator specializing in cartoons. He lives in Retford, Notts. Paul has compiled several books for Macmillan, including THE WORKS, THE WORKS 3 and THE WORKS 5. He also has his own collection, GIVE US A GOAL! He supports Everton.

Nick Toczek works as a poet, storyteller, magician, journalist, lecturer, political researcher, novelist and stand-up comedian. His work has appeared in numerous anthologies, pamphlets, magazines, newspapers, and even school text books. He works extensively in schools and is a tireless self-publicist. He is the author of NEVER STARE AT A GRIZZLY BEAR and KICK IT! and has compiled JOIN IN OR ELSE and TOOTHPASTE TROUBLE – all published by Macmillan