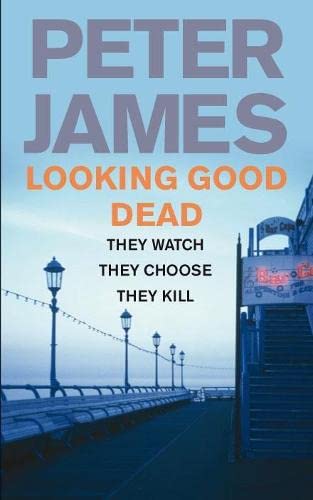 Tom Bryce did what any decent person would do. But within hours of picking up the CD that had been left behind on the train seat next him, and attempting to return it to its owner, he is the sole witness to a vicious murder. Then his young family are threatened with their lives if he goes to the police. But supported by his wife, Kellie, he bravely makes a statement, to the murder enquiry team headed by Detective Superintendent Roy Grace, a man with demons of his own - including his missing wife - to contend with. And from that moment, the killing of the Bryce family becomes a mere formality - and a grisly attraction. Kellie and Tom's deaths have already been posted on the internet. You can log on and see them on a website. They are looking good dead.

'Destined for the bestsellers' Independent on Sunday

'A terrific tale of greed, seduction and betrayal' Daily Telegraph

It's a tricky proposition, changing horses midstream. And with Looking Good Dead, Peter James continues to do just that. The author’s reputation as a purveyor of subtly chilling horror and fantasy had been carefully built up over many years, and James had few British peers in this field. But that is not quite the compliment it sounds, for the horror field is in one of its frequent slumps at present, and apart from a few American giants such as Stephen King, some highly talented figures have languished, in some cases even forfeiting their publishers. It's possible that Peter James saw the way the wind was blowing, and decided to move on from his hitherto lucrative horror work, returning to the crime arena (in which he’d worked before) with the adroit Dead Simple, the inaugural book in the series featuring Detective Superintendent Roy Grace. If DS Grace was cut from a familiar cloth (copper struggling with psychological problems), the plotting was innovative and fresh.

And so it’s proved to be once again with Looking Good Dead. Tom Bryce picks up a CD which has been left behind on a train seat, but when he attempts to track down the owner, he finds himself the only witness to a savage killing. Reporting the crime to the police has disastrous consequences for Bryce, and the lives of both he and his wife are threatened--by a notification on the Internet, no less. When DS Roy Grace becomes involved, he finds himself up against a malign group of very well organised criminals.

As in Peter James’ previous outing for Roy Grace, the plotting here is the thing. James addresses the crime genre as if he had never been away, and although Grace is, to be frank, not strikingly different from any other literary coppers, few people will complain when James’ storytelling acumen is as authoritative as it is here.
--Barry Forshaw