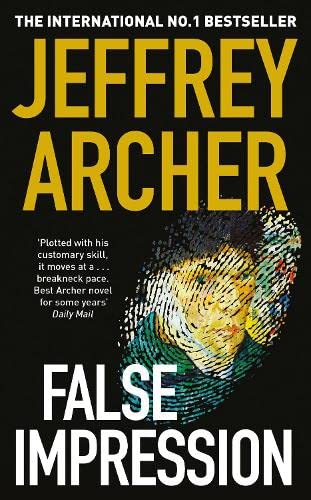 Jeffrey Archer, one of the greatest popular novelists of our generation, delivers a truly page-turning thriller.

When an aristocratic old lady is brutally murdered in her country home the night before 9/11, it takes all the resources of the FBI and Interpol to work out the connection between her and the possible motive for her death – a priceless Van Gogh painting. It’s a young woman in the North Tower when the first plane crashed into the building who has the courage and determination to take on both sides of the law and avenge the old lady’s death.

Anna Petrescu is missing, presumed dead, after 9/11 and she uses her new status to escape from America, only to be pursued across the world from Toronto to London, to Hong Kong, Tokyo and Bucharest, but it is only when she returns to New York that the mystery unfolds.

Why are so many people willing to risk their own lives and others' to own the Van Gogh Self-Portrait with Bandaged Ear?

" Archer is back in top form with [this] latest thriller." -- "Library Journal" (starred review) " Thoroughly imagined...entertaining...thrilling." -- "Denver"" Post" " Murder and a high-stakes art-world theft are cleverly blended [in this] exciting...global thrill-ride." -- "Vancouver"" Sun" " Sail along from one high crime to the next....Archer is a great plotter....[and] in the middle of the action, [he] drops research gems." -- Liz Smith, "New York"" Post"

Jeffrey Archer is one of the bestselling novelists of all time. With this novel he returns to the height of his powers as a writer. I can honestly say, as a jaded publisher, that when I first picked up this manuscript I fully expected to read a chunk and put it aside and continue to read it over a few days. Five hours later I looked up and had finished it and it was nearly one o'clock in the morning. It is basically a thundering good read! Many will say 'Well, he would say that. He's the publisher'. Read for yourself and tell me that I'm wrong. Archer is back doing what he has always done best... writing novels.

Book Description Condition: New. The theft of a priceless Van Gogh ignites a chase across the globe in Jeffrey Archer's latest international bestselling thriller" "FALSE IMPRESSION" "Why was an elegant lady BRUTALLY MURDERED the night before 9/11? Why was a successful New York banker not surprised to receive A WOMAN'S LEFT EAR in the mail? Why did a young woman with a brilliant career steal an IMPRESSIONIST PAINTING? Why was an honors graduate working as a temporary secretary after INHERITING A FORTUNE? Why was a SENIOR FBI AGENT trying to work out the connection between these four apparently innocent individuals? A breathtaking journey of twists and turns from New York to London, from Bucharest and on to Tokyo ends up in a sleepy English village where the mystery surrounding Van Gogh's last painting will finally be resolved. Seller Inventory # 9780330418829