Items related to Uncle Tungsten: Memories of a Chemical Boyhood 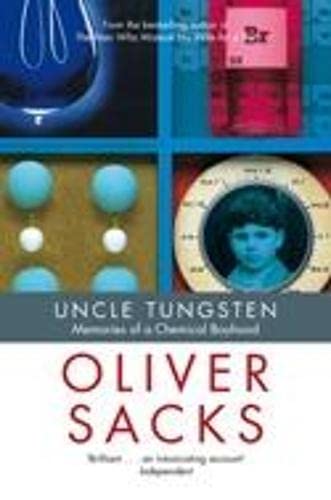 Oliver Sacks's luminous memoir Uncle Tungsten charts the growth of a mind. Born in 1933 into a family of formidably intelligent London Jews, he discovered the wonders of the physical sciences early from his parents and their flock of brilliant siblings, most notably "Uncle Tungsten" (real name, Dave), who "manufactured lightbulbs with filaments of fine tungsten wire". Metals were the substances that first attracted young Oliver, and his descriptions of their colours, textures and properties are as sensuous and romantic as an art lover's rhapsodies over an Old Master. Seamlessly interwoven with his personal recollections is a masterful survey of scientific history, with emphasis on the great chemists like Robert Boyle, Antoine Lavoisier and Humphry Davy (Sacks's personal hero). Yet this is not a dry intellectual autobiography; his parents in particular, both doctors, are vividly sketched. His sociable father loved house calls and "was drawn to medicine because its practice was central in human society", while his shy mother "had an intense feeling for structure... for her [medicine] was part of natural history and biology". For young Oliver, unhappy at the brutal boarding school he was sent to during the war, and afraid that he would become mentally ill like his older brother, chemistry was a refuge in an uncertain world. He would outgrow his passion for metals and become a neurologist, but as readers of Awakenings and The Man Who Mistook His Wife for a Hat know, he would never leave behind his conviction that science is a profoundly human endeavour. --Wendy Smith

'An intensely moving and funny account of his chaotic scientific upbringing.' -- Richard Holmes, Brilliant and Unusual Books about Science to inspire Non-Scientists - The Week