Items related to Field of 13 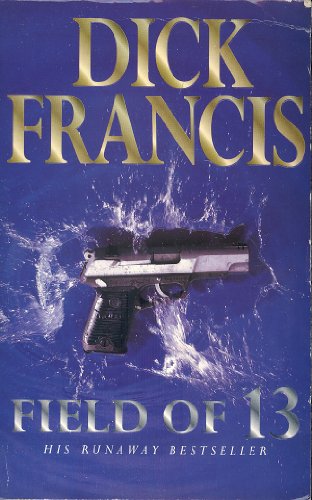 In this collection of short stories the settings range from the national Hunt at Cheltenham, where a middle-aged owner falls in love with her jockey, to the Kentucky Derby at Churchill Downs, where the demon drink and wilting willpower take their toll.

This first collection of short stories by Dick Francis (author of 10 Lb. Penalty and more than 30 other horseracing mysteries) pulls together five new tales with eight that have appeared in various periodicals over the last three decades. One of the pleasures of his stories is witnessing the breadth and variety within Francis's racetrack milieu. In "Dead on Red", a jealous jockey named Davey Rockman hires Emil Jacques, a French assassin and gun collector, to kill the famed rider who stole his job; but Rockman is haunted by his deed, in much the same way as the protagonist in Edgar Allan Poe's "The Tell-Tale Heart". "Raid at Kingdom Hill" tells of Tricksy Wilcox's scheme for a not-so-bright bomb scare, a plan that still might yield the payoff of a lifetime. "Collision Course" is free of murder but frames a delightful conflict between an out-of-work newspaperman and a bounder whose faux manners threaten to bring him down at the peak of his racing syndicate career. The Kentucky Derby story, "The Gift", follows Fred Collyer, a drunken writer who overhears plans for a major racing swindle and struggles against alcohol to publish the story by his deadline. And the collection ends with a what-if story called "Haig's Death" that examines the consequences of the sudden passing of Christopher Haig, an animal feed consultant and race-meeting judge.

Poe, who most historians of literature credit as the creator of the short story, declared that a good short story should have nothing extraneous. Francis's stories, for the most part, obey Poe's dictum. Each character and description fits tightly into an unfolding plan so that the mystery or twist is revealed with a satisfying economy of words. While Field of 13 will appeal to Francis loyalists, newcomers, too, will find much to relish in the short fiction of this mystery grandmaster. --Patrick O'Kelley

"Mesmerizing...shows the literary jockey at the top of his games."

"[Field of Thirteen] starts with a gallop and remains strong throughout." -USA Today

"Mesmerizing...shows the literary jockey at the top of his game." -Entertainment Weekly