Items related to The World's Wife 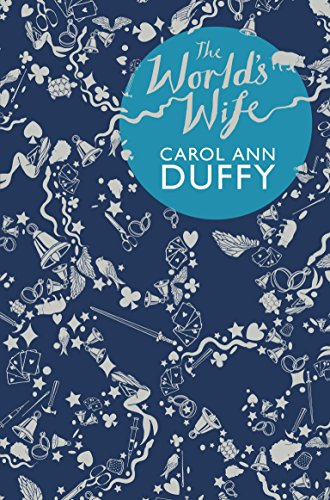 That saying? Behind every famous man . . . ? From Mrs Midas to Queen Kong, from Elvis’s twin sister to Pygmalion’s bride, they’re all here, in Carol Ann Duffy’s inspired and inspirational collection, The World’s Wife. Witty and thought-provoking, this is a tongue-in-cheek, no-holds-barred look at the real movers and shakers across history, myth and legend. If you have ever wondered, for example, how exactly Darwin came up with his theory of evolution, or what, precisely, Frau Freud thought about her husband – then this is the book for you, as the wives of the great, the good, the not so good, and the legendary are given a voice in Carol Ann Duffy’s sparkling and inventive collection.

‘Duffy takes a cheeky, subversive, no-nonsense swipe with a dish clout at the famous men of history and myth. They don’t have a chance in hell of dodging her quick-witted wallop as she relays their stories from their spouse’s points of view’ The Times

Elvis's wimpled sister rocks on in a convent she calls Graceland; Nancy Sinatra gets out her boots made for walking with the Kray Sisters; Mrs Midas misses the touch of her now dangerous golden-handed husband; and Queen Herod decrees the killing of each mother's son to protect her baby daughter in Carol Ann Duffy's startling new collection The World's Wife. Doubling is one of the most common themes--and stylistic ploys--of Western culture and thought, and the concept around which Duffy has ingeniously organised this profoundly playful collection. Mrs Midas, Mrs Aesop, Mrs Darwin, Frau Freud, Anne Hathaway, Mrs Rip Van Winkle, the Kray Sisters; these are some of the wives, and sisters, whose stories are told. These inventive, metaphorically precise poems offer much more, however, than just a recovery of the historical voice of her (supposedly) silenced indoors. Duffy dexterously rewrites Judao-Christian and classical mythologies, subverts fairytale and zestfully reinterprets the more modern myths of Darwin and Freud.

Humour is the abundant keynote of this accessible collection. Mrs Rip Van Winkle enjoys the freedom to travel and paint allowed by her husband's permanent slumbers, "Until the day / I came home with pastel of Niagara / and he was sitting up in bed rattling Viagra." Frau Freud analyses her over-exposure to "ding-a-ling, member and jock, / of todger and nudger and percy and cock," and confesses with irony to being, "as au fait with Hunt-the Salami / as Ms M. Lewinsky." Mrs Aesop groans about her husbands unstoppable garrulousness: "By Christ, he could bore for Purgatory," and Mrs Darwin evolves the following summary her husband's research:

"7 April 1852
Went to the Zoo.
I said to Him--
Something about that Chimpanzee over there
reminds me of you."


The World's Wife throws open the windows on the stuffy annals of historical myth and breezes through some of its highlights with a sense of revelry and laugh-out-loud observation. In this wry take on the historical ubiquity of heterosexual coupledom that permeates so many cultural myths, Duffy has separated vibrant women from the shadows of their more famous husbands and brothers, and divorced them from the distortions of historical silence. --Rachel Holmes

'Sparkes with wit, intelligence and an impressive lightness of touch, while drawing on some weighty emotional experiences’ -- Independent