Items related to King of the World: Muhammad Ali and the Rise of an...

Remnick, David King of the World: Muhammad Ali and the Rise of an American Hero

King of the World: Muhammad Ali and the Rise of an American Hero 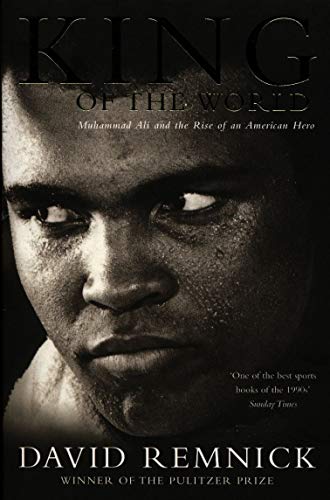 King of the World is an unforgettable account of Muhammad Ali's rise and self-creation, told by a Pulitzer Prize-winning writer, places Ali in a heritage of great American originals.

David Remnick concentrates on Ali's early career, when he was still fighting as Cassius Clay. The book begins in September 1962 with the fight between Floyd Patterson and Sonny Liston, providing a remarkable sociological backdrop to Ali's entrance on the boxing scene. Remnick then describes Clay's 1964 fight with Liston, which even his own people thought Clay couldn't win, and takes us through to 1967 when Ali refused the military draft to Vietnam. This is much more than a sports book. It is a study of the rise of the black voice in the American consciousness and a look at how the media creates its heroes - Cassius Clay began as a 'light-hitting loudmouth' before becoming gradually canonized by the American press and public as Muhammad Ali.

King of the World takes us back to the days when his life was a series of battles, inside the ring and out. A master storyteller at the height of his powers, David Remnick has written a book worthy of America's most dynamic modern hero.

You'd think there wouldn't be much left to say about a living icon like Muhammad Ali, yet David Remnick imbues King of the World with all the freshness and vitality this legendary fighter displayed in his prime. Beginning with the pre-Ali days of boxing and its two archetypes, Floyd Patterson (the good black heavyweight) and Sonny Liston (the bad black heavyweight), Remnick deftly sets the stage for the emergence of a heavyweight champion the likes of which the world had never seen: a three-dimensional, Technicolor showman, fighter and minister of Islam, a man who talked almost as well as he fought. But mostly Remnick's portrait is of a man who could not be confined to any existing stereotypes, inside the ring or out.

In extraordinary detail, Remnick depicts Ali as a creation of his own imagination as we follow the wilful and mercurial young Cassius Clay from his boyhood and watch him hone and shape himself to a figure who would eventually command centre stage in one of the most volatile decades in our history. To Remnick it seems clear that Ali's greatest accomplishment is to prove beyond a doubt that not only is it possible to challenge the implacable forces of the establishment (the noir-ish, gangster-ridden fight game and the ethos of a whole country) but, with the right combination of conviction and talent, to triumph over these forces. --Fred Haefele

Succeeds more than any previous book in bringing Ali into focus . . . as a starburst of energy, ego and ability whose like will never be seen again (Wall Street Journal)

Penetrating . . . reveals details that even close followers might not have known. . . . An amazing story (New York Times)

By now we all have our notions about what Ali meant - to his time and to the history of his sport. Of course David Remnick sheds light on these subjects, but where King of the World really shines is in the ring itself. With telling detail, Remnick captures the drama, danger, beauty, and ugliness of a generation's worth of big heavyweight fights (Bob Costa)

Astute, double-hearted, irresistible. He is so completely in charge of his craft that it becomes an art. (Toni Morrison, author of Beloved)

1. King of the World

2. King of the World (Paperback)

Book Description 1999. Paperback. Condition: New. 1st. Paperback. With an introduction by Salman Rushdie.It was the night of February 25, 1964. A cloud of cigar smoke drifted through the ring lights. Cassius Clay threw punches into the gray floating haze.Shipping may be from multiple locations in the US or from the UK, depending on stock availability. 336 pages. 0.250. Seller Inventory # 9780330371896

3. King of the World: Muhammad Ali and the Rise of an American Hero

4. King of the World

5. King of the World (Paperback)

Book Description 1999. Paperback. Condition: New. 1st. Paperback. With an introduction by Salman Rushdie.It was the night of February 25, 1964. A cloud of cigar smoke drifted through the ring lights. Cassius Clay threw punches into the gray .Shipping may be from our Sydney, NSW warehouse or from our UK or US warehouse, depending on stock availability. 336 pages. 0.250. Seller Inventory # 9780330371896

6. King of the World Remnick, David

7. KING OF THE WORLD