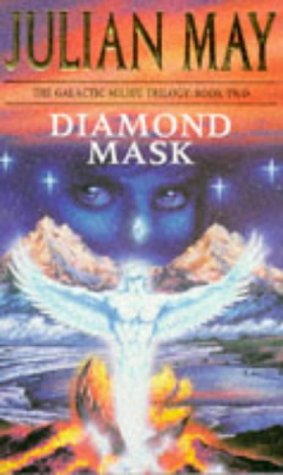 The sequel to "Jack the Bodiless" and second in the Galactic Milieu trilogy. As the 21st century draws to an end, rebels plot to declare the human planets independent from the Milieu. They are helped by the insane Fury who wants to rule himself. Dorothea is a key figure in Fury's scheme.

Julian May was born in Chicago in 1931. She has written numerous books, including the four books of The Saga of Pliocene Exile, the two books of Intervention, and The Galactic Milieu Trilogy. She also collaborated with André Norton and Marion Zimmer Bradley on the successful fantasy novel Black Trillium. May lives in Bellevue, Washington.

tury was drawing to a close, and metapsychic humankind was poised at last to achieve Unity -- to be admitted into the group mind of the already unified alien races of the Galactic Milieu. But a growing corps of rebels was plotting to keep the people of Earth forever separate in the name of human individuality. And the rebels had a secret supporter: Fury, the insane metapsychic creatrue that would stop at nothing to claim humanity for itself. Fury's greatest enemy was the mutant genius Jack the Bodiless, whose power it craved. But Jack would never be a tool for Fury . . .
And so it turned to Dorothea Macdonald, a young woman who had spent a lifetime hiding her towering mindpowers from the best mind readers of the Milieu. But she could not hide them from Fury -- or from Jack. Time and again she rejected their advances, unwilling to be drawn into the maelstrom of galactic politics or megalomaniacal dreams. And in the end, no one -- not Jack, not Fury, not even the Galactic Milieu -- would be a mat

Book Description Pan, 1994. Paperback. Condition: Used; Good. Dispatched, from the UK, within 48 hours of ordering. This book is in good condition but will show signs of previous ownership. Please expect some creasing to the spine and/or minor damage to the cover. Damaged cover. The cover of is slightly damaged for instance a torn or bent corner. Aged book. Tanned pages and age spots, however, this will not interfere with reading. Seller Inventory # CHL4408353

Book Description Pan MacMillan, 1995. Condition: Good. A+ Customer service! Satisfaction Guaranteed! Book is in Used-Good condition. Pages and cover are clean and intact. Used items may not include supplementary materials such as CDs or access codes. May show signs of minor shelf wear and contain limited notes and highlighting. Seller Inventory # 0330322990-2-4

Book Description Pan, 1994. Paperback. Condition: Used; Good. Dispatched, from the UK, within 48 hours of ordering. This book is in good condition but will show signs of previous ownership. Please expect some creasing to the spine and/or minor damage to the cover. Damaged book. Slightly damaged in some way typically, a grazed corner or torn cover. Seller Inventory # CHL5893920

Book Description Pan MacMillan, 1995. Paperback. Condition: Fair. A readable copy of the book. Cover and pages have some creasing and there is a little discolouration. Pages are intact and not marred by notes or highlighting. The spine remains intact. Seller Inventory # G0020352

Book Description Pan, 1994. Paperback. Condition: Used; Good. **Simply Brit** Shipped with Premium postal service within 24 hours from the UK with impressive delivery time. We have dispatched from our book depository; items of good condition to over ten million satisfied customers worldwide. We are committed to providing you with reliable and efficient service at all times. Seller Inventory # 1223975

Book Description Tor, 1995. Paperback. Condition: Good. All orders are dispatched the following working day from our UK warehouse. Established in 2004, we have over 500,000 books in stock. No quibble refund if not completely satisfied. Seller Inventory # mon0004429660

Book Description Paperback. Condition: Very Good. The book has been read, but is in excellent condition. Pages are intact and not marred by notes or highlighting. The spine remains undamaged. Seller Inventory # GOR001345075

Book Description Paperback. Condition: Good. The book has been read but remains in clean condition. All pages are intact and the cover is intact. Some minor wear to the spine. Seller Inventory # GOR001186482