Items related to As Eagles Fly 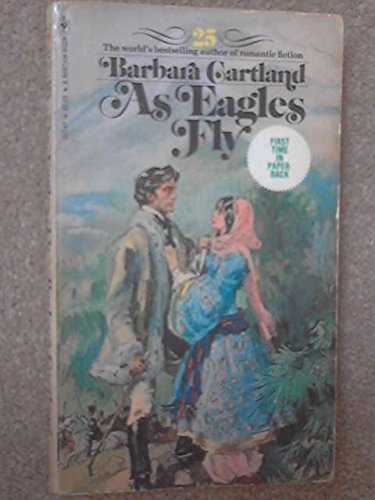 The handsome and aristocratic, thirty-five year old diplomat Lord Athelstan knows that he is heading for trouble on his mission to the Caucasus to investigate how long the legendary Shamyl, the Imam of Daghestan, can hold out against the invading Russians. But little does he expect to be faced with another kind of conflict - with a beautiful young hostage imprisoned in the Imam's stronghold. The lovely Natasha is only nineteen and she was seized along with a Royal party by the Imam's followers and held to ransom against the release of the Imam's only son by the Russians. Orphaned, she has no hope of raising a ransom and instead has reluctantly agreed to be given to the Sultan of Turkey as a 'wife' for his vast harem in return for the release of her nine-year-old brother. The Imam implores Lord Athelstan to escort Natasha safely to Constantinople - a favour he cannot grant lest it anger the Russians and compromise Great Britain. But then he meets her - undoubtedly the most glorious woman he has ever seen, with fire in her eyes, when he informs her that he cannot agree to Shamyl's request. Ultimately Natasha gives him no choice and, when she appears among his party in disguise, Lord Athelstan is furious. Soon their mutual hatred turns to all-consuming love - a love surely doomed by Natasha's pledge to sacrifice herself to the Sultan's harem for the sake of her brother -

Dame Mary Barbara Hamilton Cartland was one of the most successful writers of romance novels of all time, with estimated worldwide sales of one billion copies in thirty-six languages. Cartland published her first novel, Jigsaw, in 1923, aslightly naughty society thriller that became a bestseller. She quickly became one of the United Kingdom's most popular media personalities, and by 1983 she rated the top-selling author in the world by the Guinness Book of World Records. In the mid-1990s, by which time she had sold over a billion books, Vogue magazine called her 'the true Queen of Romance'. She died in year 2000, at the age of ninety-eight.

Book Description Paperback. Condition: Good. The book has been read but remains in clean condition. All pages are intact and the cover is intact. Some minor wear to the spine. Seller Inventory # GOR002593458

Book Description Macmillan, 1975. Paperback. Condition: Good. All orders are dispatched the following working day from our UK warehouse. Established in 2004, we have over 500,000 books in stock. No quibble refund if not completely satisfied. Seller Inventory # mon0005220384