Items related to Gone with the Wind

Mitchell, Margaret Gone with the Wind

Gone with the Wind 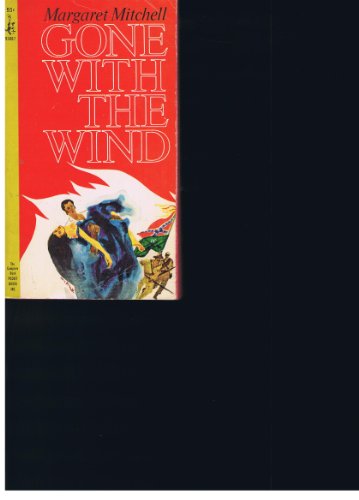 "Fascinating and unforgettable! A remarkable book, a spectacular book, a book that will not be forgotten!" -- "Chicago Tribune"

"I first read "Gone with the Wind" in grade school--a boy of the upper South who'd seen the great movie and felt compelled to learn what lay behind it, all thousand-plus pages worth. No page disappointed me. What other American novel surpasses its eagerness to tell a great story of love and war; what characters equal the cantankerous passions of Scarlett and Rhett? Even Scott Fitzgerald spoke well of it. What more could I ask, even seven decades later?" -- Reynolds Price

"GWTW is an indelible portrait of a unique time and place, American's greatest political and moral conflict, and the myths that surround it -- an all absorbing spectacle of a read even for postmodern readers. Mitchell vividly portrays the disillusionment and devastation of war, the ignorance of the uninitiated, and the transformation of arrogance into tenacity that shaped the first "new South." All the details of history and place come together as a rich backdrop for those unforgettable characters: shallow and selfish Scarlett, sincere Melanie, moony-eyed Ashley, and the sage, pragmatic, dashing, and rakish Rhett Butler--the most enduring heartthrob of American literature has produced. I'd reread the book for the thrill of Rhett alone!" -- Darnell Arnoult, author of "Sufficient Grace"

"In 1936 I was in E.M. Daggett Junior High in Ft. Worth, Texas. By some chance I was able to read "Gone with the Wind" early on. Then and now, I found it one of the great experiences of a young life. I still list it as one of my 10 favorite books." -- Liz Smith, nationally syndicated columnist

"Beyond a doubt one of the most remarkable first novels produced by an American writer. It is also one of the best." -- "The New York Times"

"Not just a great love story, "Gone with the Wind" is one of the most powerful anti-war novels ever written. Told from the standpoint of the women left behind, author Margaret Mitchell brilliantly illustrates the heartbreaking and devastating effects of war on the land and its people." -- Fannie Flagg, Academy Award nominated-author

"The best novel to have ever come out of the South...it is unsurpassed in the whole of American writing." -- "The Washington Post"

"Let's say you've read "Gone with the Wind" at least twice, and seen the movie over and again. So, here's a thought. Buy this handsome paperback edition, just for Pat Conroy's preface. This passionate, nearly breathless love letter is a Song of Solomon to Margaret Mitchell, Scarlett O'Hara, and Conroy's beautiful, GTW-obsessed mother. Indeed, his luminous preface packs a durable wallop, just like the epic Pulitzer prize-winning work that inspires it." -- Jan Karon, author of "The Mitford Years" series

"In my own personal life, I find many similarities to Scarlett's: The whole 17-inch waist thing notwithstanding, I do love a barbecue, both for the food and the men--I have been known to "eat like a field hand and gobble like a hawg"--I admit that at least on one occasion I may have feigned interest in some guy to further my own interests--I have fought tooth, toenail and tirelessly for my family--I learn slow but I learn good--and even so, I still adore the prospect of dealing with most things...Tomorrow." -- Jill Conner Browne, The Sweet Potato Queen, bestselling author of "The Sweet Potato Queens' First Big-Ass Novel"

""Gone with the Wind" is one of those rare books that we never forget. We read it when we're young and fall in love with the characters, then we watch the film and read the book again and watch the film again and never get tired of revisiting an era that is the most important in our history. Rhett and Scarlet and Melanie and Ashley and Big Sam and Mammy and Archie the convict are characters who always remain with us, in the same way that Twain's characters do. No one ever forgets the scene when Scarlet wanders among the wounded in the Atlanta train yard; no one ever forgets the moment Melanie and Scarlet drag the body of the dead Federal soldier down the staircase, a step at a time. "Gone with the Wind" is an epic story. Anyone who has not read it has missed one of the greatest literary experiences a reader can have." -- James Lee Burke, bestselling author of "The Tin Roof Blowdown "

One of the most famous love stories of all time

1. Gone with the Wind

Book Description Paperback. Condition: Good. All orders are dispatched the following working day from our UK warehouse. Established in 2004, we have over 500,000 books in stock. No quibble refund if not completely satisfied. Seller Inventory # mon0004480232

2. Gone with the Wind

3. Gone with the Wind

Book Description Condition: Very Good. This book is in very good condition and will be shipped within 24 hours of ordering. The cover may have some limited signs of wear but the pages are clean, intact and the spine remains undamaged. This book has clearly been well maintained and looked after thus far. Money back guarantee if you are not satisfied. See all our books here, order more than 1 book and get discounted shipping. . Seller Inventory # 7719-9780330240048

4. Gone with the Wind

Book Description Paperback. Condition: Used; Good. **Simply Brit** Shipped with Premium postal service within 24 hours from the UK with impressive delivery time. We have dispatched from our book depository; items of good condition to over ten million satisfied customers worldwide. We are committed to providing you with reliable and efficient service at all times. Seller Inventory # 1217840

5. Gone with the Wind

Book Description Paperback. Condition: Used; Good. Wear and Tear to cover. stains on the side **SHIPPED FROM UK** We believe you will be completely satisfied with our quick and reliable service. All orders are dispatched as swiftly as possible! Buy with confidence!. Seller Inventory # 3923849

6. Gone with the Wind

7. Gone with the Wind

Book Description Condition: Very Good. Shipped within 24 hours from our UK warehouse. Clean, undamaged book with no damage to pages and minimal wear to the cover. Spine still tight, in very good condition. Remember if you are not happy, you are covered by our 100% money back guarantee. Seller Inventory # 6545-9780330240048

8. Gone with the Wind

9. Gone With The Wind