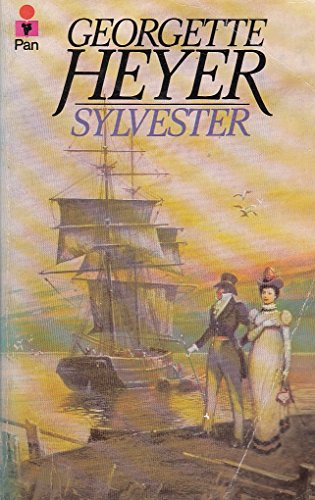 Endowed with rank, wealth and elegance, Sylvester, Duke of Salford, is intrigued when his visit causes his prospective bride, Phoebe, to flee her home. A historical romance from the author of THE BLACK MOTH, ARABELLA and APRIL LADY.

Although this is an abridged version of Heyer's work, British actor Richard Armitage makes this exceptionally fun to listen to. The only drawback is that listeners will be disappointed that he didn't read the full-length version. Armitage is perhaps best known for playing the most appealing John Thornton in the BBC production of Elizabeth Gaskell's North and South. He also played the dastardly Guy of Gisborne in Robin Hood, and, a spy in Spooks. Armitage's reading is warm, lively, simply brilliant. He easily voices all characters and regional and class differences with ease and captures the underlying tension and growing romantic interest between Phoebe and Sylvester. The period classical music between chapters adds wonderful, appropriate atmosphere. --Jean Palmer, Soundcommentary.com

...Talking of Regency romance, a favourite Georgette Heyer novel is Sylvester, which has a wicked uncle, a feisty heroine, a clash of personalities, a desperately cute child and a daffy mama. It's also read by the seductive-voiced Richard Armitage, just the pick me up for the end of winter. --Kati Nicholl, Daily Express

Allow me to begin by saying I have not read a single Georgette Heyer book in print. I have, however, listened to three of her audiobooks and, although I m far from being proficient in all things Heyer, I can lay claim to the opinion that you can't read just one. I m slowly exploring the audio versions of her books and gaining interest with each. That s a pleasant surprise since I honestly never expected to enjoy Heyer to the point that I would seek out more of her writing. Listening to Sylvester was actually a part of my 2010 Unofficial Personal Listening Challenge over at AAR s Speaking of Audiobooks column. This particular part of my challenge was to listen to an abridged version of an audiobook, a format I avoid if at all possible. To my way of thinking, the much more common unabridged versions are far preferable since I want to hear all of a story, not a cut-up version to make it shorter. However, I had a couple of things working to my favor as I listened. First, I hadn t read Sylvester in print and my unfamiliarity with Heyer's works probably worked to my favor as I failed to recognize any possible offense an abridgement might bring about. But secondly, and most importantly to me, was the fact that Sylvester is narrated by none other than Richard Armitage. Sylvester Rayne, the wealthy Duke of Salford, is an arrogant sort of man and thoroughly practical as well. Deciding it s time to marry, Sylvester makes a list of five suitable young ladies for consideration and presents it to his mother seeking her advice. When he shares the list with his godmother as well, she adds another one to the list - her granddaughter Phoebe Marlow. Sylvester travels to Phoebe's home for a visit although he has high doubts that they will suit. After visiting with her family for only a short time, Sylvester is certain of one thing he and Miss Marlow (who is a rather boring, plain girl to his way of thinking) will most certainly not suit. Bemoaning the fact that he agreed to the visit, he silently endures it, although the family offends his sensibilities at every turn. Little does he know that Phoebe is adamantly opposed to any thought of marrying him. She remembers Sylvester only as the smug, aloof duke who snubbed her during her London season. As one who visualizes the main characters while reading romance, the image of Richard Armitage as the Duke of Salford is made all the more delicious in audio since he is actually articulating the duke's every word. As narrator, Armitage understands the essence of Sylvester with its myriad of characters and that is evidenced not only by his characterizations but also his performance of those scenes between Sylvester and Phoebe. In the world of romance audiobooks, timing and understanding of the underlying emotions are of utmost importance for an audio success and Armitage scores high on both points. As he clearly distinguishes one voice from another, it s obvious that Armitage has a firm grasp on what makes each character unique as the listener comprehends much of the character s background simply through the hearing. Take Armitage's outstanding performance and add to it a completely delightful story and you have the makings of an absolute audio success. The banter between Sylvester and Phoebe is ingenious and quite humorous as well. As I listened to Sylvester once again for this review I found myself chuckling softly even more than I had the first time as I had developed quite an appreciation for these characters. The four hours and fifty one minutes seemed to passed much too quickly, but that s mostly due to the fact that I was so thoroughly enjoying what I heard. Yes, in a perfect world, Armitage would be narrating the unabridged version of Sylvester, but as far as abridgments go, I don t think you can get much better than this. --- Lea Hensley, All About Romance blog

Book Description Pan Macmillan, United Kingdom, London, 1988. Paperback. Condition: Very Good. Endowed with rank, wealth and elegance, Sylvester, Duke of Salford, is intrigued when his visit causes his prospective bride, Phoebe, to flee her home. A historical romance from the author of THE BLACK MOTH, ARABELLA and APRIL LADY. The book has been read, but is in excellent condition. Pages are intact and not marred by notes or highlighting. The spine remains undamaged. Seller Inventory # GOR001783440

Book Description Pan Books 06/11/1970, 1970. Paperback. Condition: Very Good. Shipped within 24 hours from our UK warehouse. Clean, undamaged book with no damage to pages and minimal wear to the cover. Spine still tight, in very good condition. Remember if you are not happy, you are covered by our 100% money back guarantee. Seller Inventory # 6545-9780330025898

Book Description -, 1970. Paperback. Condition: Very Good. Sylvester This book is in very good condition and will be shipped within 24 hours of ordering. The cover may have some limited signs of wear but the pages are clean, intact and the spine remains undamaged. This book has clearly been well maintained and looked after thus far. Money back guarantee if you are not satisfied. See all our books here, order more than 1 book and get discounted shipping. Seller Inventory # 7719-9780330025898

4. Sylvester , or The Wicked Uncle

5. Sylvester, or, The wicked uncle

Book Description Pan Books 1970-11-06, 1970. Paperback. Condition: Good. Item is in good condition. Some moderate creases and wear. This item may not come with CDs or additional parts including access codes for textbooks. Might be an ex-library copy and contain writing/highlighting. Photos are stock pictures and not of the actual item. Seller Inventory # DS-0330025899-3