Items related to Volpe's Neurology of the Newborn, 6e

Volpe's Neurology of the Newborn, 6e 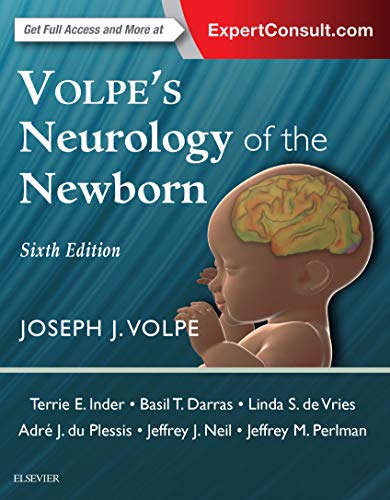 A clear, engaging writing style, hundreds of full-color images, and new information throughout make Volpe's Neurology of the Newborn, 6th Edition, an indispensable resource for those who provide care for neonates with neurological conditions. World authority Dr. Joseph Volpe, along with Dr. Terrie E. Inder and other distinguished editors, continue the unparalleled clarity and guidance you've come to expect from the leading reference in the field - keeping you up to date with today's latest advances in diagnosis and management, as well as the many scientific and technological advances that are revolutionizing neonatal neurology.

"This edition reaffirms the preeminent place is holds as the gold standard in this field. The addition of new editors and authors has broadened the scope and brought even greater credibility to the opinions expressed in areas that are controversial. This is a "must have" for every neonatal care provider and will probably find its way into many courtrooms where the etiology of perinatal brain injury is being adjudicated." Reviewed by Jay P. Goldsmith, MD (Tulane University School of Medicine) Doody's Score: 97, 5 Stars!

Dr. Volpe received his M.D. degree from the Harvard Medical School, completed a Pediatric residency at the Massachusetts General Hospital, carried out a postdoctoral research fellowship at the NIH and trained in Pediatric Neurology at the Massachusetts General Hospital. He then served for 20 years on the faculty at Washington University in St. Louis, the last ten years the Stein Professor of Neurology and Director of the Division of Pediatric Neurology. In 1990 he was named Neurologist-in-Chief at the Boston Children's Hospital, Bronson Crothers Professor of Neurology at the Harvard Medical School, and Chairman of the Department of Neurology at Children's Hospital/Harvard Medical School. Under Dr. Volpe's leadership over the next 15 years, the Department of Neurology grew to a faculty size of over 50 child neurologists and neuroscientists. The clinical and research programs became the largest and most diverse of any child neurology facility in the world.
Dr. Volpe generally is credited with having pioneered the field of neonatal neurology. His work in that field has included both clinical and basic research. The principal focus of his research has been elucidation of the pathogenesis of the major forms of brain injury in the newborn, and prevention of this injury. He has contributed more than 300 original articles and his single-authored book, Neurology of the Newborn, over five editions, is considered "the bible" in the field. Previous reviews have characterized the book as "an extraordinary work of scholarship”, "so comprehensive, it is beyond criticism”, "a treasure for those interested in the neurologic disorders of the newborn”, "the standard reference for all involved in the care of the newborn infant”.
Dr. Volpe is also widely recognized for his dedication to the training of academic child neurologists and neonatologists, and many of his approximately 100 past trainees are key figures in programs in neonatal neurology throughout the world. He also has trained approximately 50 research fellows in clinical and basic research, most of whom hold academic positions worldwide.
He has received many awards nationally and internationally, including the most prestigious awards of major academic societies of pediatrics child neurology, and neonatology worldwide. In 1997 he was elected to the Institute of Medicine (National Academy of Medicine) of the U.S. National Academy of Sciences. In 2007 the Boston Children's Hospital created the Joseph J. Volpe Chair in Neurology, currently held by Dr. Basil Darras, one of the editors of this book.
In this sixth edition, Dr. Volpe has led a distinguished group of editors and authors, all of whom are former trainees and colleagues. The book retains the dedication to excellence apparent in the previous five single-authored editions.

Dr. Basil T. Darras is Associate Neurologist-in-Chief and Chief of the Division of Clinical Neurology at Boston Children's Hospital, and the Joseph J. Volpe Professor of Neurology at Harvard Medical School. Dr. Darras is a pediatric neurologist with advanced training and certification in human genetics and neuromuscular medicine. At Boston Children's he serves as Director of the Neuromuscular Program, which includes one of the oldest and most active muscular dystrophy clinics in the country and where he specializes in the care of children with neuromuscular conditions originating from inherited or acquired conditions of the motor unit. He has published over 140 original reports in peer-reviewed journals and over 70 chapters, reviews and editorials; his major publications and specific research interests have focused on the molecular genetics, diagnostics, and therapeutics of Duchenne and Becker muscular dystrophies and spinal muscular atrophy, and on defining the indications for new diagnostic methodologies in the evaluation of children with pediatric neuromuscular diseases. Basic research, carried out in collaboration with scientists in the research laboratories of Boston Children's and other institutions, focuses on the description of novel mutations in patients with neuromuscular diseases and the application of new technologies to explore the pathogenesis and treatment of congenital myopathies and muscular dystrophies. Dr. Darras is site PI for the consortium conducting Pediatric Neuromuscular Clinical Research in Spinal Muscular Atrophy, and site PI/PD for the NeuroNEXT NINDS Program. He is currently involved in multiple clinical trials of novel genetic interventions for the treatment of spinal muscular atrophy and Duchenne muscular dystrophy.

Linda de Vries is a neonatologist and pediatric neurologist, and obtained her PhD degree in Utrecht (1987). Since 1989, she has worked in the department of Neonatology in the University Medical Center Utrecht, where she is a professor in Neonatal Neurology. Her research focuses on prediction of neurodevelopmental outcome in high risk preterm and full-term newborns, using neurophysiology and neuro-imaging methods. These at risk children are also seen by her in the follow-up clinic until early childhood. She has a special interest in neonatal stroke and brain plasticity. Her work has been published in >400 publications.

1. Volpe's Neurology of the Newborn

5. Volpe's Neurology of the Newborn

7. Volpe's Neurology of the Newborn

8. Volpe's Neurology of the Newborn

9. Volpe's Neurology of the Newborn - 6E

10. Volpe's Neurology of the Newborn