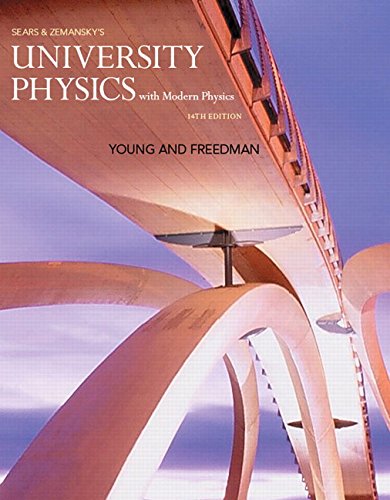 For courses in calculus-based physics.

The benchmark for clarity and rigor, influenced by the latest in education research.

Since its first edition, University Physics has been revered for its emphasis on fundamental principles and how to apply them. This text is known for its clear and thorough narrative, as well as its uniquely broad, deep, and thoughtful sets of worked examples that provide students with key tools for developing both conceptual understanding and problem-solving skills.

The Fourteenth Edition improves the defining features of the text while adding new features influenced by education research to teach the skills needed by today’s students. A focus on visual learning, new problem types, and pedagogy informed by MasteringPhysics metadata headline the improvements designed to create the best learning resource for physics students.

MasteringPhysics® from Pearson is the leading online homework, tutorial, and assessment system, designed to improve results by engaging students before, during, and after class with powerful content. Instructors ensure students arrive ready to learn by assigning educationally effective content before class and encourage critical thinking and retention with in-class resources such as Learning Catalytics. Students can further master concepts after class through traditional and adaptive homework assignments that provide hints and answer-specific feedback. The Mastering gradebook records scores for all automatically graded assignments in one place, while diagnostic tools give instructors access to rich data to assess student understanding and misconceptions.

Mastering brings learning full circle by continuously adapting to each student and making learning more personal than ever—before, during, and after class.

At UCSB, Dr. Freedman has taught in both the Department of Physics and the College of Creative Studies, a branch of the university intended for highly gifted and motivated undergraduates. He has published research in nuclear physics, elementary particle physics, and laser physics. In recent years, he has worked to make physics lectures a more interactive experience through the use of classroom response systems and pre-lecture videos.

In the 1970s Dr. Freedman worked as a comic book letterer and helped organize the San Diego Comic-Con (now the world’s largest popular culture convention) during its first few years. Today, when not in the classroom or slaving over a computer, Dr. Freedman can be found either flying (he holds a commercial pilot’s license) or with his wife, Caroline, cheering on the rowers of UCSB Men’s and Women’s Crew.

Hugh D. Young was Emeritus Professor of Physics at Carnegie Mellon University. He earned both his undergraduate and graduate degrees from that university. He earned his Ph.D. in fundamental particle theory under the direction of the late Richard Cutkosky. He joined the faculty of Carnegie Mellon in 1956 and retired in 2004. He also had two visiting professorships at the University of California, Berkeley.

Dr. Young earned a bachelor’s degree in organ performance from Carnegie Mellon in 1972 and spent several years as Associate Organist at St. Paul’s Cathedral in Pittsburgh. He often ventured into the wilderness to hike, climb, or go caving with students in Carnegie Mellon's Explorers Club, which he founded as a graduate student and later advised. Dr. Young and his wife, Alice, hosted up to 50 students each year for Thanksgiving dinners in their home.

Always gracious, Dr. Young expressed his appreciation earnestly: “I want to extend my heartfelt thanks to my colleagues at Carnegie Mellon, especially Professors Robert Kraemer, Bruce Sherwood, Ruth Chabay, Helmut Vogel, and Brian Quinn, for many stimulating discussions about physics pedagogy and for their support and encouragement during the writing of several successive editions of this book. I am equally indebted to the many generations of Carnegie Mellon students who have helped me learn what good teaching and good writing are, by showing me what works and what doesn’t. It is always a joy and a privilege to express my gratitude to my wife, Alice, and our children, Gretchen and Rebecca, for their love, support, and emotional sustenance during the writing of several successive editions of this book. May all men and women be blessed with love such as theirs.” We at Pearson appreciated his professionalism, good nature, and collaboration. He will be missed.

Book Description Addison-Wesley, 2015. Softcover. Condition: New. 14. ***International Edition***Soft cover/Paperback*** Textbook printed in English. ***Brand New***. Most international edition has different ISBN and Cover design. Some book may show sales disclaimer such as "Not for Sale or Restricted in US" on the cover page but it is absolutely legal to use. Please provides valid phone number with your order for easy delivery. Seller Inventory # dp9780321973610