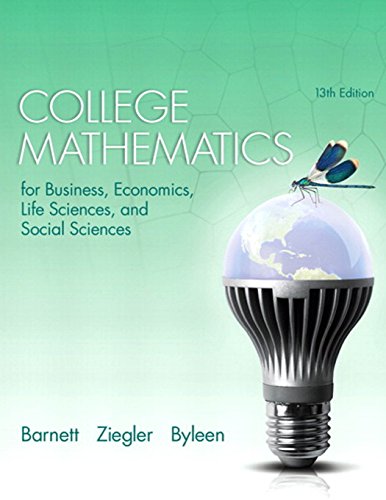 Barnett/Ziegler/Byleen is designed to help students help themselves succeed in the course. This text offers more built-in guidance than any other on the market—with special emphasis on prerequisites skills—and a host of student-friendly features to help students catch up or learn on their own.

Raymond A. Barnett, a native of California, received his B.A. in mathematical statistics from the University of California at Berkeley and his M.A. in mathematics from the University of Southern California. He has been a member of the Merritt College Mathematics Department, and was chairman of the department for four years. Raymond Barnett has authored or co-authored eighteen textbooks in mathematics, most of which are still in use. In addition to international English editions, a number of books have been translated into Spanish.

Michael R. Ziegler (late) received his B.S. from Shippensburg State College and his M.S. and Ph.D. from the University of Delaware. After completing post doctoral work at the University of Kentucky, he was appointed to the faculty of Marquette University where he held the rank of Professor in the Department of Mathematics, Statistics, and Computer Science. Dr. Ziegler published over a dozen research articles in complex analysis and co-authored eleven undergraduate mathematics textbooks with Raymond A. Barnett, and more recently, Karl E. Byleen.

Karl E. Byleen received his B.S., M.A. and Ph.D. degrees in mathematics from the University of Nebraska. He is currently an Associate Professor in the Department of Mathematics, Statistics and Computer Science of Marquette University. He has published a dozen research articles on the algebraic theory of semigroups.

Book Description Paperback. Condition: New. This is printed on High-Quality acid free paper "Brand New International Edition" Textbook which has different ISBN and Cover design than US Edition but same contents as the US edition. Some book may show sales disclaimer such as "Not for Sale or Restricted in US" on the cover page but it is absolutely legal to use. ** Not low quality India edition.** CD/DVD or access codes may not be included. Seller Inventory # GB201900157