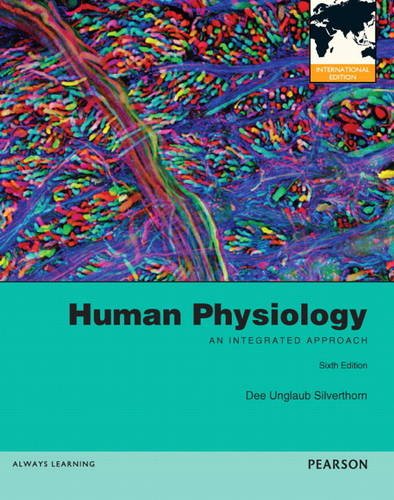 Human Physiology: An Integrated Approach broke ground with its thorough coverage of molecular physiology seamlessly integrated into a traditional homeostasis-based systems approach. The newly revised Sixth Edition introduces a major reorganization of the early chapters to provide the best foundation for the course and new art features that streamline review and essential topics so that students can access them more easily on an as-needed basis.

Dee Unglaub Silverthorn studied biology as an undergraduate at Tulane University and received a Ph.D. in marine science from the University of South Carolina. Her research interest is epithelial transport, and recent work in her laboratory has focused on transport properties of the chick allantoic membrane. She began her teaching career in the Physiology Department at the Medical University of South Carolina but over the years has taught a wide range of students, from medical and college students to those still preparing for higher education. At the University of Texas-Austin she teaches physiology in both lecture and laboratory settings, and instructs graduate students on developing teaching skills in the life sciences. She has received numerous teaching awards and honors, including the 2009 Outstanding Undergraduate Science Teacher Award from the Society for College Science Teachers, the American Physiological Society’s Claude Bernard Distinguished Lecturer and Arthur C. Guyton Physiology Educator of the Year, UT System Regents’ Outstanding Teaching Award, and multiple awards from UT-Austin, including the Burnt Orange Apple Award. The first edition of her textbook won the 1998 Robert W. Hamilton Author Award for best textbook published in 1997―98 by a University of Texas faculty member. Dee recently completed six years as editor-in-chief of Advances in Physiology Education and she works with members of the International Union of Physiological Sciences to improve physiology education in developing countries. She is the incoming president (2012-13) of the Human Anatomy and Physiology Society, and an active member of the American Physiological Society, the Society for Comparative and Integrative Biology, the Association for Biology Laboratory Education, and the Society for College Science Teachers. Her free time is spent creating multimedia fiber art and enjoying the Texas hill country with her husband, Andy, and their dogs.

About the Illustrators
Dr. William C. Ober received his undergraduate degree from Washington and Lee University and his M.D. from the University of Virginia. While in medical school, he also studied in the Department of Art as Applied to Medicine at Johns Hopkins University. After graduation, Dr. Ober completed a residency in Family Practice and later was on the faculty at the University of Virginia in the Department of Family Medicine. He is currently an Affiliate Professor of Biology at Washington and Lee University and is part of the Core Faculty at Shoals Marine Laboratory, where he teaches Biological Illustration every summer.

Claire W. Garrison, R.N., B.A., practiced pediatric and obstetric nursing before turning to medical illustration as a full-time career. She returned to school at Mary Baldwin College where she received her degree with distinction in studio art. Following a five-year apprenticeship, she has worked as Dr. Ober’s partner in Medical & Scientific Illustration since 1986. She is on the Core Faculty at Shoals Marine Laboratory and co-teaches the Biological Illustration course.