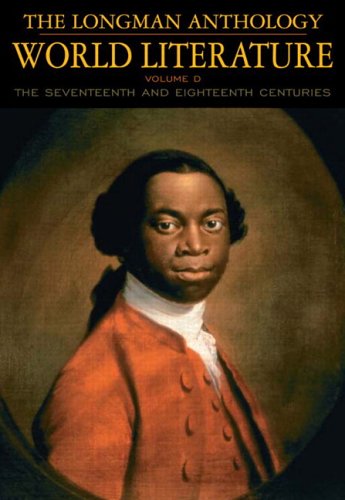 The Longman Anthology of World Literature, Volume D offers a fresh and highly teachable presentation of the varieties of world literature from the 17th and 18th centuries.

"'The Longman Anthology of World Literature" is a very good anthology and an important contribution to a transitional view on literature, including both minor and major streams and works.' "Mads Rosendahl Thomsen, University of Aarhus, Denmark"

April Alliston is Assistant Professor of Comparative Literature at Princeton University. She is the editor of a critical edition (forthcoming) of The Recess by Sophia Lee, one of the books discussed in the present volume.

Marshall Brown in Professor of English at the University of Washington.

Page DuBois is Professor of Classics and Cultural Studies at the University of California, San Diego. Her books include Sappho is Burning, Torture and Truth, and Sowing the Body: Psychoanalysis and Ancient Representations of Women.

Sabry Hafez is a leading literary critic in the Arab World. He has published extensively in Arabic and English, with several books and numerous articles on the Arabic novel, the short story and drama. He is currently lecturer in Arabic at the School of Oriental and African Studies [University of London].

Ursula K. Heise is Associate Professor of English at Stanford University, where she teaches contemporary literature and literary theory. She specializes in twentieth-century literatures of the Americas and Western Europe, in theories of modernization, postmodernization, and globalization, and in
ecocriticism. Her other areas of research and teaching interest include media theory, literature and science, science fiction, animal representations and urban studies.
Djelal Kadir has recently been appointed Professor of Humanities and Editor-Director of the international quarterly, "World Literature Today" at the University of Oklahoma.

David L. Pike is a professor in the Department of Literature at American University.
Sheldon Pollock is Arvind Raghunathan Professor of South Asian Studies at Columbia University.

Bruce Robbins is Professor of English and Comparative Literature at Rutgers University. He is the author of "Secular Vocations: Intellectuals, Professionalism, and Culture" and "The Servant's Hand". He has also edited several collections, the latest of which is "Cosmopolitics", with Pheng Cheah.

Haruo Shirane, Shincho Professor of Japanese Literature at Columbia University, is a specialist in Japanese literature and culture, with special interest in prose fiction, poetry, and drama; the interaction between popular and elite cultures; and issues of cultural memory. He is the author and editor of over twenty books. His most recent book, Japan and the Culture of the Four Seasons (2012), explores the cultural construction of nature across a wide spectrum of media and arts.

Jane Tylus is professor of Italian studies and comparative literature at New York University, where she is also faculty director of the Humanities Initiative. Her recent publications include "Reclaiming Catherine of Siena: Literacy, Literature, and the Signs of Others", also published by the University of Chicago Press, and "The Poetics of Masculinity in Early Modern Italy", coedited with Gerry Milligan.