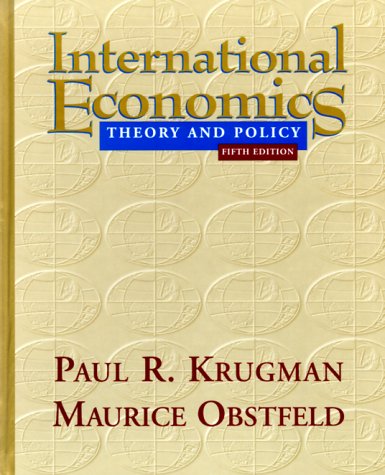 International Economics, the best-selling textbook in the field, is written by two of the world's preeminent economists. Both the real trade portion of the book and the monetary portion are divided into a core of chapters focused on theory, followed by chapters applying the theory major policy questions, past and current. International Economics presents an integrated treatment of Ricardian, specific factors, factor endowments, and imperfect competition models of trade, along with in-depth analysis of empirical evidence. It covers the effects and causes of trade policy, including strategic trade policy, focusing on the income-distribution effects of trade. The book provides a unified model of open-economy macroeconomics based on an asset-market approach to exchange rate determination with a central role for expectations. The new edition contains updated coverage of the euro and of the causes and likely effects of economic and monetary union (EMU) in Europe. It also features an up-to-date treatment of developing countries' experiences in an all-new Chapter 22. The chapter focuses on long-run income convergence, disinflation and exchange rate regimes, recent crises in Latin America, Russia, and Asia, and reform of the international financial “architecture.”

“Krugman and Obstfeld are, individually, at the very top of the fields of international trade and finance. I’ve used their textbook for years, and I welcome the new material that they include in this latest revision.”
–Alan Deardorff, University of Michigan

“Krugman and Obstfeld present material in a clear and intuitive manner, leaving aside as much of the technical detail as possible. Students find the graphical analysis to be extremely helpful in understanding the material.”
–Robert G. Murphy, Boston College

“Krugman and Obstfeld is the leading textbook in the field because it approaches all aspects of international economics by utilizing both analytical and quantitative methods.”
–Iordanis Petsas, University of Scranton

Paul Krugman earned his Ph.D. in economics from MIT, and has since taught at some of United States¿ most prestigious universities, including Yale, Stanford, MIT, and currently, Princeton University.

Krugman spent a year in the early 1980s working in the White House for the Council of Economic Advisors. He has written and edited several hundred articles and 18 internationally acclaimed books. Notably, he is recognized as a co-founder of the "new trade theory," which has been an important contribution to the fields of economics and finance.

In recognition of his achievements, Krugman was awarded the John Bates Clark medal in 1991.

Obstfeld has authored numerous articles and highly influential books. In view of his prominence in the fields of economics and finance, he has served as consultant for the World Bank, as participant in the European Commission Study Group on the impact of the Euro on capital markets, and most recently as the honorary advisor for the Institute of Economic and Monetary Studies, Bank of Japan.