Items related to The Longman Anthology of British Literature, the, Volume... 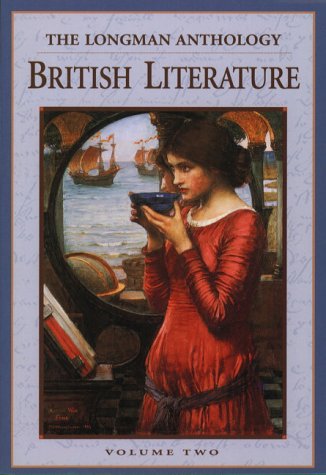 The Longman Anthology of British Literature is the most comprehensive and thoughtfully arranged text in the field, offering a rich selection of compelling British authors through the ages.

With its first edition, The Longman Anthology of British Literature created a new paradigm for anthologies. Responding to major shifts in literary studies over the past thirty years, it was the first collection to pay sustained attention to the contexts within which literature is produced, even as it broadened the scope of that literature to embrace the full cultural diversity of the British Isles. Within its pages, canonical authors mingle with newly visible writers; English accents are heard next to Anglo-Norman, Welsh, Gaelic, and Scottish ones; female and male voices are set in dialogue; literature from the British Isles is integrated with post-colonial writing; and major works are illumined by clusters of shorter texts that bring literary, social, and historical issues vividly to life.

Fresh and up-to-date introductions and notes are written by an editorial team whose members are all actively engaged in teaching and in current scholarship, and 150 illustrations (50 new to this edition) show both artistic and cultural developments from the medieval period to the present.

The Third Edition builds on the pioneering features of the previous two editions, expanding the strong core of frequently taught works while continuing to lead the way in responding to the shifting interests of the discipline.

THE LONGMAN ANTHOLOGY OF BRITISH