Items related to City Of God 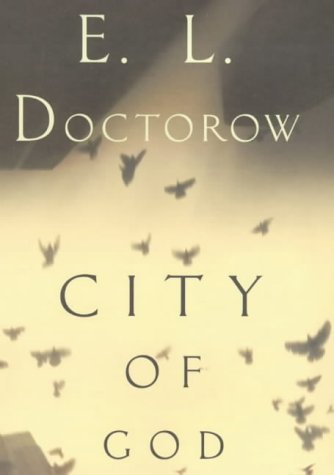 CITY OF GOD begins in mystery: the large brass cross behind the altar of St. Timothy's Episcopal Church in lower Manhattan has disappeared ... and even more mysteriously reappeared on the roof of the Synagogue for Evolutionary Judaism on the Upper West Side. The church's maverick rector and young rabbinical couple who lead the synagogue set about attempting to learn who the vandals are who have committed this strange double act of desecration and to what purpose, but their joint clerical investigation only deepens the mystery. A writer alerted to the story by a newspaper article befriends the priest and the rabbis and find that their struggles with their respective traditions are relevant to the case. In fact, as the narrative advances and the story broadens, more and more people are implicated in what may be the elusive prophecy of a new American culture. Daringly poised at the junction of the sacred and the profane, the book opens into a multi-voiced narrative that incorporates the monumental historical events and predominating ideas of our age.

E.L. Doctorow's City of God starts off not merely with a bang but with the big bang itself, that "great expansive flowering, a silent flash into being in a second or two of the entire outrushing universe". It doesn't remain on this cosmic plane throughout. There's a mystery here, along with a romance, a chilling Holocaust narrative and a deep-focus portrait of fin-de-siécle Manhattan.

In the early pages of the novel, an enormous brass cross is pilfered from a church on the Lower East Side. Father Thomas Pemberton of St Timothy's promptly sets off in search of it, dubbing himself the Divinity Detective. Yet he suspects from the start that this is no ordinary theft, with no ordinary solution. The cross eventually turns up on the roof of the Synagogue for Evolutionary Judaism, a tiny Manhattan institution to which Pemberton has clearly been led by fate. His encounter with the synagogue's rabbinical duo--a husband-and-wife team struggling to reclaim a pre-scriptural state of "unmediated awe"--transforms his life. It also destroys what's left of his conventional Christian belief. As his relationship with Judaism deepens, he discards the clerical collar altogether and embarks upon a penitential exploration of the Holocaust--which in turn allows Doctorow to loop his narrative back and forth between several generations of (mostly) Jew and Gentile.

City of God is a marvellous hybrid which includes a metafictional framework (i.e., an author-as-character with a rather Doctorovian CV), an ongoing rumination on city life and a dozen other major strands and minor players. There is an undeniable power to the way Doctorow makes his fictional worlds collide, setting off all manner of historical and philosophical conflagrations. At one point he imagines "the totality of intimate human narrations/composing a hymn to enlightenment/if that were possible". A tall order, yes. But despite its occasional longueurs, City of God suggests that it is possible indeed. --James Marcus

E L Doctorow is an astonishing novelist - astonishing not only in the virtuosity with which he deploys his mimetic skills, but also in the fact that it is impossible to predict even roughly the shape, scope and tone of one of his novels from its predecessors (NEW YORK TIMES BOOK REVIEW)

Doctorow is a master of atmosphere ... He knows the art of storytelling inside and out (NEWSWEEK)

CITY OF GOD is a very good novel about contemporary America and its troubled search for reconciliation between science and faith. (GUARDIAN)

Book Description Little, Brown, 2000. Hardcover. Condition: Good. First Edition. Ex-Library Book. Has usual library markings and stamps inside. All orders are dispatched the following working day from our UK warehouse. Established in 2004, we have over 500,000 books in stock. No quibble refund if not completely satisfied. Seller Inventory # mon0004673260

Book Description Little, Brown, 2000. Hardcover. Condition: Very Good. First Edition. All orders are dispatched the following working day from our UK warehouse. Established in 2004, we have over 500,000 books in stock. No quibble refund if not completely satisfied. Seller Inventory # mon0005144837

Book Description Little, Brown 06/04/2000, 2000. Condition: Very Good. This book is in very good condition and will be shipped within 24 hours of ordering. The cover may have some limited signs of wear but the pages are clean, intact and the spine remains undamaged. This book has clearly been well maintained and looked after thus far. Money back guarantee if you are not satisfied. See all our books here, order more than 1 book and get discounted shipping. . Seller Inventory # 7719-9780316854702

Book Description Little, Brown and Company, 2000. Hardcover. Condition: Used; Good. **Simply Brit** Shipped with Premium postal service within 24 hours from the UK with impressive delivery time. We have dispatched from our book depository; items of good condition to over ten million satisfied customers worldwide. We are committed to providing you with reliable and efficient service at all times. Seller Inventory # mon0001513569

Book Description Little, Brown, 2000. Hardcover. Condition: Used; Good. **SHIPPED FROM UK** We believe you will be completely satisfied with our quick and reliable service. All orders are dispatched as swiftly as possible! Buy with confidence!. Seller Inventory # mon0000295856

Book Description Little, Brown (USA), 2000. Hardback. Condition: LIKE NEW. 2000. Little, Brown (USA). first reprint. near fine. dj VG. 9.5x6.5 272pp. A novel beginning with the extraordinary disappearance from St. Timothy's Episcopal Church of the large brass cross behind the altar. Its reappearance on the roof of a synagogue sets off a remarkable clerical investigation. Seller Inventory # 321199

Book Description Little, Brown, UK, 2000. Trade Paperback. Condition: Near Fine. First Edition. In the autumn of 1999, the large brass cross behind the altar of St. Timothy's Episcopal Church in lower Manhattan disappears - and mysteriously reappears on the roof of the Synagogue for Evolutionary Judaism. The church's maverick rector and young rabbinical couple who lead the synagogue set about attempting to learn who the vandals are. Quantity Available: 1. Category: Fiction; 1001 Books You Must Read Before You Die; ISBN: 0316854700. ISBN/EAN: 9780316854702. Inventory No: 10050207. The photo of this book is of the actual book for sale. Seller Inventory # 10050207