Items related to A Life In Secrets: Vera Atkins and the Lost Agents...

Helm, Sarah A Life In Secrets: Vera Atkins and the Lost Agents of SOE

A Life In Secrets: Vera Atkins and the Lost Agents of SOE 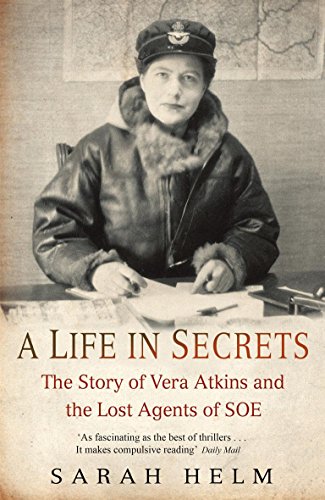 During World War Two the Special Operation Executive's French Section sent more than 400 agents into Occupied France - at least 100 never returned and were reported 'Missing Believed Dead' after the war. Twelve of these were women who died in German concentration camps - some were tortured, some were shot, and some died in the gas chambers. Vera Atkins had helped prepare these women for their missions, and when the war was over she went out to Germany to find out what happened to them and the other agents lost behind enemy lines. But while the woman who carried out this extraordinary mission appeared quintessentially English, she was nothing of the sort. Vera Atkins, who never married, covered her life in mystery so that even her closest family knew almost nothing of her past. In A LIFE IN SECRETS Sarah Helm has stripped away Vera's many veils and - with unprecedented access to official and private papers, and the cooperation of Vera's relatives - vividly reconstructed an extraordinary life.

'Impressive and obsessive . . . a bizarrely fascinating – as well as a chillingly horrific – story' -- LITERARY REVIEW

‘A thorough and fascinating reconstruction of a tragedy that encompassed treachery, naivety, inter-service rivalry and, everywhere, bravery’ -- ECONOMIST

‘As fascinating as the best of thrillers . . . compulsive reading’ -- Peter Lewis, DAILY MAIL

‘Masterly . . . Sarah Helm has exposed much that was never meant to be known. And we must never forget it’ -- Betty Boothroyd, MAIL ON SUNDAY

‘This is a gripping concentricity of stories, well told with abundant detail, at a cracking pace’ -- THE TABLET

The definitive account of an absorbing double mystery: the fates of the missing female SOE agents and the truth about the woman who searched for them

A Life in Secrets : Vera Atkins and the Lost Agents of Soe

A Life in Secrets : Vera Atkins and the Lost Agents of Soe Helm, Sarah