Items related to The Bancroft Strategy 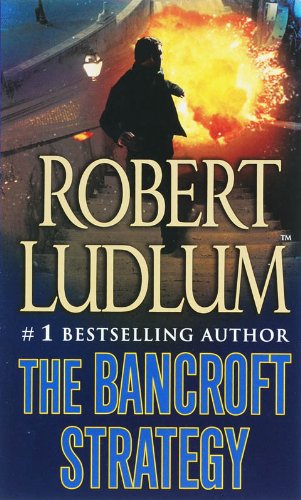 When Todd Belknap - a field agent for Consular Operations with a reputation as something of a cowboy - is cut loose from the agency after an operation goes wrong, his best friend and fellow agent is abducted in Lebanon by a vicious militia group. When the government refuses to help, Belknap decides to take matters into his own hands.

Meanwhile, hedge fund analyst Andrea Newton gets an unexpected call - she has been left six million dollars by a cousin she's never met. But there's one condition: she must agree to sit on the board of the Newton foundation, a charitable organization run by the family patriarch, Paul Newton. Having never even met the family - her mother was married only briefly and cut all contact many years ago - Andrea is intrigued. But the foundation, supposedly dedicated to doing good deeds, appears less and less benign the more deeply involved she gets...

What exactly is their involvement with the 'Genesis' - a mysterious group working to destabilize the geopolitical balance at the risk of millions of lives? As events escalate, Todd and Andrea must form an uneasy alliance if they are to uncover the truth behind 'Genesis' - before it's too late.

Formulaic, tough-boy stuff from the man who created The Bourne Identity. (Daily Mirror)

This is fun. It's a romp, but an intelligent, self-aware romp with that rarity, a real twist. (Jeremy Jehu Telegraph)

The brilliant global thriller from the master storyteller ...

Book Description St. Martin's Paperbacks. Condition: Good. . . All orders guaranteed and ship within 24 hours. Before placing your order for please contact us for confirmation on the book's binding. Check out our other listings to add to your order for discounted shipping. Seller Inventory # BOS-I-08e-01015

Book Description St. Martins, 2007. Mass Market Paperback. Condition: Good. All orders are dispatched the following working day from our UK warehouse. Established in 2004, we have over 500,000 books in stock. No quibble refund if not completely satisfied. Seller Inventory # mon0003880767