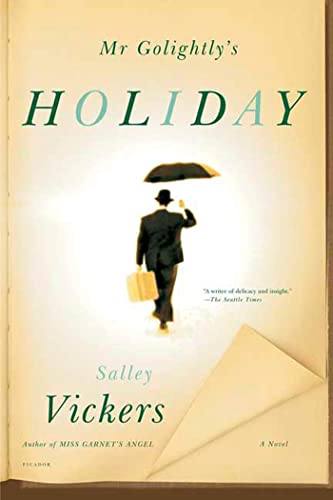 Many years ago, Mr. Golightly wrote a work of dramatic fiction that grew to be an astonishing international bestseller. But his reputation is on the decline and he finds himself badly out of touch with the modern world. He decides to take a holiday and comes to the historic village of Great Calne, hoping to use the opportunity to bring his great work up to date. But he soon finds that events take over his plans and that the themes he has written on are being strangely replicated in the lives of the villagers around him. As he comes to know his neighbors better, Mr. Golightly begins to examine his attitude toward love and to ponder the terrible catastrophe of his only son's death -- so, too, we begin to learn the true and extraordinary identity of Mr. Golightly.

Fiction readers with a sweet tooth and a high tolerance of Anglican whimsy are offered much beguilement in Sally Vickers' new novel Mr Golightly's Holiday. Set in the Devon village of Great Calne, it records the events observed, and in part precipitated, by Mr Golightly, the author of a work once famous but now tending to be overlooked, who has elected to settle himself in this community for a while. Mr Golightly himself, a rumpled, elderly figure arriving in a half-timbered Traveller van, is a familiar enough version of "the male author"; Great Calne, an apparently idyllic village with a wide range of carefully differentiated characters, but underneath seething with unseen discontents and rivalries, is itself another easily summoned trope--the kind of community now perhaps most commonly encountered in fictional terms in TV shows. This is handy, for Mr Golightly decides that the best way of dragging his great work into the limelight of popularity and relevance is to recast it as a soap opera. In the event, he makes little headway with this project because, of course, the affairs of the village become all-absorbing and gradually draw him in. And so things unfold, as the characters carefully established by Sally Vickers work out their destinies in a mixture of social comedy (some of it very sharp), melodrama, nature mysticism and visionary redemption that delivers far more than the opening paragraphs can suggest. Moreover, the precise identity of Mr Golightly, while not exactly part of the plot, is disclosed gradually and may come as a surprise to some.

It should be said that this is not really a novel, although it does offer many of the satisfactions of a novel. It is a fable with distinctly eschatological overtones, and as such runs the general risks of the genre, most of which are successfully negotiated. --Robin Davidson

"A writer of delicacy and insight." --The Seattle Times

"[Mr. Golightly's Holiday] invites you to sit back and consider the large issues of remorse, redemption, and creation." --The Boston Globe

"[Mr. Golightly's Holiday] sparkles with gems of greatness." --The Oklahoman