Items related to After Man 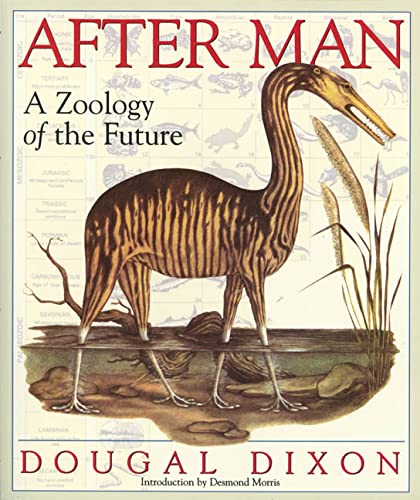 What exotic creatures does tomorrow hold? Dougal Dixon's classic work of speculative anthropology blends science and fantasy in a stunning zoology of the future.

"Uncannily believable. Dixon's invented animals, some of them beautiful enough to live, engender reflection about the mysterious forces at work beneath the skin of real animals." --"The New York Times Book Review""A fascinating, elegant fantasy." --"Boston Globe"""After Man "is grand fun and marvelously imaginative." --"The Los Angeles Times Book Review""[Dixon's] brief explanation of the principles of evolution is so lucid, and the detailed illustrations of futuristic beasts are so charming, that "After Man "is bound to captivate readers of all ages." --"Chicago Sun-Times""An extraordinary book! There are wonders on every page. "After Man "is an extrapolative tour de force." --"Isaac Asimov's Science Fiction Magazine""Stunning in execution and implication, this will be a decided treat for futurist biology student or enthusiast, science fiction fan and general reader." --"Booklist"

Dougal Dixon studied geology and paleontology at the University of St. Andrews, where he continued as a research student to revise the standard work on the palaeogeography of the British Isles. In recent years he has worked in publishing and has contributed numerous articles about earth science and evolution to encyclopedias and popular science books. Model making and the creation of animated films occupy much of his spare time. The idea of writing about evolution looking forwards rather than backwards was not a sudden inspiration but has been evolving in the author's mind ever since his college days.

1. After Man: A Zoology of the Future Dixon, Dougal

2. After Man: A Zoology of the Future Dixon, Dougal

3. After Man: A Zoology of the Future Dixon, Dougal

4. After Man: A Zoology of the Future

Book Description St. Martin's Griffin, 1998. Paperback. Condition: New. Excellent condition. Interior is tight, bright and clean; no underlining, notes or highlighting. Binding is smooth and solid. Paperback cover is clean and sticker free. Minor scuffing and/or corner bumps on the paperback covers due to shelf wear. 100% Satisfaction Guaranteed. All items are carefully enclosed with bubble wrap. We ship promptly and worldwide via US Post and will email you a tracking number. Seller Inventory # SKU0057081

5. After Man: A Zoology of the Future