Items related to King of Capital: The Remarkable Rise, Fall, and Rise...

King of Capital: The Remarkable Rise, Fall, and Rise Again of Steve Schwarzman and Blackstone 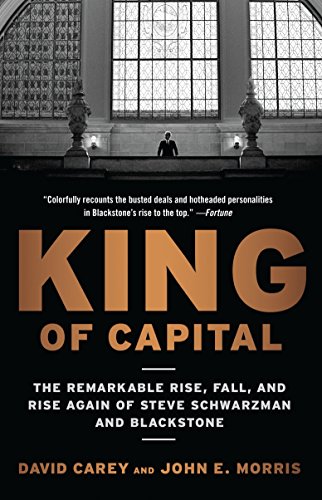 "Discover the untold story of financier Steve Schwarzman, who managed to avoid the self-destructive tendencies of Wall Street and transform Blackstone, his financial powerhouse, from a company filled with gamblers and hostile takeover artists to a place of disciplined, risk-conscious investors. Analyses the controversies surrounding Blackstone and whether it and other private equity firms suck the lifeblood out of companies to enrich themselves - or whether they are a force that helps make the companies they own stronger and thereby better competitors."

"The authors ... [take] us from the early days of the Blackstone Group, when the firm was just two guys and a secretary, to the buyout boom, when Mr. Schwarzman's conspicuous consumption became a symbol of the new Gilded Age. In between, the book dives deeply into the firm's signature deals -- Celanese! Nalco! Distressed cable bonds! -- that made Mr. Schwarzman and his partners so rich. It also delivers some fun details about many of the now-famous Wall Street players that did tours of duty at the firm.
--New York Times DealBook

"Carey and Morris' thorough reporting offers a compelling look into the little understood Wall Street giant and the secrets of its success."
--Worth Magazine "[R]anks as one of the most even-handed treatments of the industry. David Carey and John Morris . . . received unusual access to Blackstone. . . . This allowed them to chronicle the firm in full and entertaining fashion across its 25-year history."
--Bloomberg Brief - Mergers "[A] broad history of private equity, with Blackstone as the touchstone."
--Fortune.com

"Check out "King of Capital" because it's got gossip, it's got brains, and it's as readable as hell. And it's got some really good Schwarzman stories too."
--The Deal

"King of Capital aspires to be a serious portrait of Blackstone and the way that Schwarzman so brilliantly built it up, scoring numerous coups along the way and avoiding the mistakes of many competitors. And it does a fine job in what it sets out to do."
--Financial Times

"The authors link Blackstone's history to the larger story of private equity's expansion and its relationship to corporate America. They offer a lucid explanation of how the debt markets evolved from junk bonds to securitised loans, changing the types of deals that private-equity firms were able to finance."
--The Economist
About the Author:

DAVID CAREY is a reporter at Bloomberg. Before joining Bloomberg, he was a senior writer for The Deal, an editor of Corporate Finance magazine, and wrote for Adweek, Fortune, Institutional Investor, and Financial World.

JOHN E. MORRIS has been a Bloomberg Brief editor, an editor with Dow Jones Investment Banker, and was for many years an assistant managing editor at The Deal in New York and London. Before that, he was an editor and writer at The American Lawyer magazine.

To find out more visit: www.king-of-capital.com

1. King of Capital: The Remarkable Rise, Fall, and Rise Again of Steve Schwarzman and Blackstone

Book Description Random House USA Inc, United States, 2016. Paperback. Condition: New. Reprint. Language: English. Brand new Book. The story of Steve Schwarzman, Blackstone, and a financial revolution, King of Capital is the greatest untold success story on Wall Street. In King of Capital, David Carey and John Morris show how Blackstone (and other private equity firms) transformed themselves from gamblers, hostile-takeover artists, and 'barbarians at the gate' into disciplined, risk-conscious investors while the financial establishment--banks and investment bankers such as Citigroup, Bear Stearns, Lehman, UBS, Goldman Sachs, Merrill Lynch, Morgan Stanley--were recklessly assuming risks, leveraging up to astronomical levels and driving the economy to the brink of disaster. Now, not only have Blackstone and a small coterie of competitors wrested control of corporations around the globe, but they have emerged as a major force on Wall Street, challenging the likes of Goldman Sachs and Morgan Stanley for dominance. Insightful and hard-hitting, filled with never-before-revealed details about the workings of a heretofore secretive company that was the personal fiefdom of Schwarzman and Peter Peterson, King of Capital shows how Blackstone and private equity will drive the economy and provide a model for how financing will work in the years to come. Seller Inventory # AA99780307886026

3. KING OF CAPITAL: THE REMARKABLE

4. KING OF CAPITAL: THE REMARKABLE

5. King of Capital: The Remarkable Rise, Fall, and Rise Again of Steve Schwarzman and Blackstone

9. King of Capital : The Remarkable Rise, Fall, and Rise Again of Steve Schwarzman and Blackstone