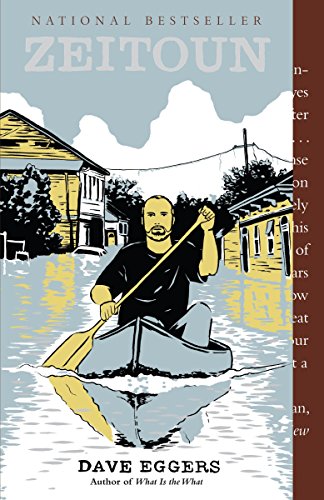 The true story of one family, caught between America’s two biggest policy disasters: the war on terror and the response to Hurricane Katrina.

Abdulrahman and Kathy Zeitoun run a house-painting business in New Orleans. In August of 2005, as Hurricane Katrina approaches, Kathy evacuates with their four young children, leaving Zeitoun to watch over the business. In the days following the storm he travels the city by canoe, feeding abandoned animals and helping elderly neighbors. Then, on September 6th, police officers armed with M-16s arrest Zeitoun in his home. Told with eloquence and compassion, Zeitoun is a riveting account of one family’s unthinkable struggle with forces beyond wind and water.

"Imagine Charles Dickens, his sentimentality in check but his journalistic eyes wide open, roaming New Orleans after it was buried by Hurricane Katrina. . . . Eggers' tone is pitch-perfect--suspense blended with just enough information to stoke reader outrage and what is likely to be a typical response: How could this happen in America? . . . It's the stuff of great narrative nonfiction. . . . Fifty years from now, when people want to know what happened to this once-great city during a shameful episode of our history, they will still be talking about a family named Zeitoun." --Timothy Egan, The New York Times Book Review

"[A] heartfelt book, so fierce in its fury, so beautiful in its richly nuanced, compassionate telling of an American tragedy, and finally, so sweetly, stubbornly hopeful." --The Times-Picayune (New Orleans) "Zeitoun is a riveting, intimate, wide-scanning, disturbing, inspiring nonfiction account of a New Orleans married couple named Abdulrahman and Kathy Zeitoun who were dragged through their own special branch of Kafkaesque (for once the adjective is unavoidable) hell after Hurricane Katrina. . . . [It's] unmistakably a narrative feat, slowly pulling the reader into the oncoming vortex without literary trickery or theatrical devices, reminiscent of Mailer's Executioner's Song but less craftily self-conscious in the exercise of its restraint. Humanistic, that is, in the highest, best, least boring sense of the word." --James Wolcott, Vanity Fair

"A major achievement and [Eggers's] best book yet." --The Miami Herald

"Zeitoun offers a transformative experience to anyone open to it, for the simple reasons that it is not heavy-handed propaganda, not eat-your-peas social analysis, but an adventure story, a tale of suffering and redemption, almost biblical in its simplicity, the trials of a good man who believes in God and happens to have a canoe. Anyone who cares about America, where it is going and where it almost went, before it caught itself, will want to read this thrilling, heartbreaking, wonderful book." --Neil Steiberg, Chicago Sun-Times "Which makes you angrier--the authorities' handling of Hurricane Katrina or the treatment of Arabs since Sept. 11, 2001? Can't make up your mind? Dave Eggers has the book for you. . . . Zeitoun is a warm, exciting and entirely fresh way of experiencing Hurricane Katrina. . . . Eggers makes this account completely new, and so infuriating I found myself panting with rage." --Dan Baum, San Francisco Chronicle

"A masterpiece of compassionate reporting about a shameful time in our history." --O, The Oprah Magazine

"Eggers's sympathy for Zeitoun is as plain and real as his style in telling the man's story. He doesn't try to dazzle with heartbreaking pirouettes of staggering prose; he simply lets the surreal and tragic facts speak for themselves. And what they say about one man and the city he loves and calls home is unshakably poignant--but not without hope." --Chris Nashawaty, Entertainment Weekly "Zeitoun is a story about the Bush administration's two most egregious policy disasters--the War on Terror and the response to Hurricane Katrina--as they collide with each other and come crashing down on one family. Eggers tells the story entirely from the perspective of Abdulrahman and Kathy Zeitoun, although he says he has vigorously double-checked the facts and removed any inaccuracies from their accounts. At first, as a reader, I felt some resistance to this tactic--could the Zeitouns possibly be as wholesome and all-American as Eggers depicts them?--but the sheer momentum, emotional force and imagistic power of the narrative finally sweep such objections away." --Andrew O'Hehir, Salon
About the Author:

Dave Eggers is the author of six previous books, including You Shall Know Our Velocity, winner of the Independent Book Award, and What Is the What, a finalist for the 2006 National Book Critics Circle Award and winner of France’s Prix Medici. That book, about Valentino Achak Deng, a survivor of the civil war in southern Sudan, gave birth to the Valentino Achak Deng Foundation, run by Mr. Deng and dedicated to building secondary schools in southern Sudan. Eggers is the founder and editor of McSweeney’s, an independent publishing house based in San Francisco that produces books, an eponymous quarterly journal, a monthly magazine (The Believer), and Wholphin, a quarterly DVD of short films and documentaries. In 2002, with Nínive Calegari he co-founded 826 Valencia, a nonprofit writing and tutoring center for youth in the Mission District of San Francisco. Local communities have since opened sister 826 centers in Chicago, Los Angeles, Brooklyn, Ann Arbor, Seattle, and Boston. In 2004, Eggers taught at the University of California–Berkeley Graduate School of Journalism, and there, with Dr. Lola Vollen, he co-founded Voice of Witness, a series of books using oral history to illuminate human rights crises around the world. A native of Chicago, Eggers graduated from the University of Illinois with a degree in journalism. He now lives in the San Francisco Bay Area with his wife and two children.

Book Description Random House USA Inc, United States, 2010. Paperback. Condition: New. Reprint. Language: English. Brand new Book. National Bestseller The true story of one family, caught between America's two biggest policy disasters: the war on terror and the response to Hurricane Katrina. Abdulrahman and Kathy Zeitoun run a house-painting business in New Orleans. In August of 2005, as Hurricane Katrina approaches, Kathy evacuates with their four young children, leaving Zeitoun to watch over the business. In the days following the storm he travels the city by canoe, feeding abandoned animals and helping elderly neighbors. Then, on September 6th, police officers armed with M-16s arrest Zeitoun in his home. Told with eloquence and compassion, Zeitoun is a riveting account of one family's unthinkable struggle with forces beyond wind and water. A New York Times Notable Book An O, The Oprah Magazine Terrific Read of the YearA Huffington Post Best Book of the Year A New Yorker Favorite Book of the Year A Chicago Tribune Favorite Nonfiction Book of the Year A Kansas City Star Best Book of the Year A San Francisco Chronicle Best Book of the Year An Entertainment Weekly Best Book of the Decade. Seller Inventory # LIB9780307387943

Book Description Paperback. Condition: New. Paperback. National BestsellerA "New York Times "Notable BookAn "O, The Oprah Magazine "Terrific Read of the YearA "Huffington Post "Best Book of the YearA "New Yor.Shipping may be from multiple locations in the US or from the UK, depending on stock availability. 337 pages. 0.363. Seller Inventory # 9780307387943