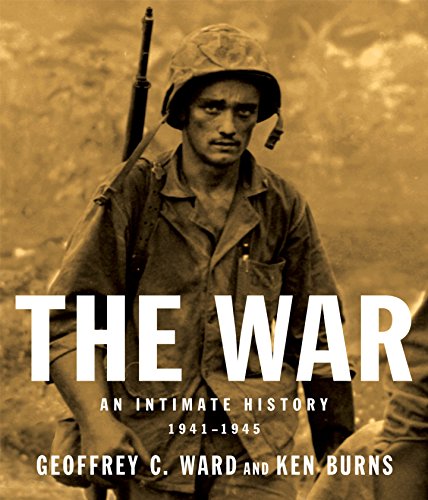 The vivid voices that speak from these pages are not those of historians or scholars. They are the voices of ordinary men and women who experienced--and helped to win--the most devastating war in history, in which between 50 and 60 million lives were lost.

Focusing on the citizens of four towns-- Luverne, Minnesota; Sacramento, California; Waterbury, Connecticut; Mobile, Alabama;--The War follows more than forty people from 1941 to 1945. Woven largely from their memories, the compelling, unflinching narrative unfolds month by bloody month, with the outcome always in doubt. All the iconic events are here, from Pearl Harbor to the liberation of the concentration camps--but we also move among prisoners of war and Japanese American internees, defense workers and schoolchildren, and families who struggled simply to stay together while their men were shipped off to Europe, the Pacific, and North Africa. Enriched by maps and hundreds of photographs, including many never published before, this is an intimate, profoundly affecting chronicle of the war that shaped our world.

"Ken Burns has done it again. He has given us an intimate, memorable, and provocative portrait of America in World War II--the valor and victory, sacrifice and shame of ordinary Americans, north, south, east, and west. This is a treasure." --Tom Brokaw

"Heartrending . . . Unique not only among previous volumes that have accompanied Burns's documentaries but among just about any book on World War II . . . It should be read by everyone in the family, from the high-schoolers to the Baby Boomers." --Newark Star-Ledger
About the Author:

Geoffrey C. Ward wrote the script for the film series The War and is the winner of five Emmys and two Writers Guild of America awards for his work for public television. He is also a historian and biographer and the author of fourteen books, including most recently Unforgivable Blackness: The Rise and Fall of Jack Johnson. He won the National Book Critics Circle Award in 1989 and the Francis Parkman Prize in 1990. He lives in New York City.

Ken Burns, producer and director of the film series The War, founded his own documentary company, Florentine Films, in 1976. His films include Jazz, Baseball, and The Civil War, which was the highest-rated series in the history of American public television. His work has won numerous prizes, including the Emmy and Peabody Awards, and two Academy Award nominations. He lives in Walpole, New Hampshire.