Items related to The Romantic Challenge 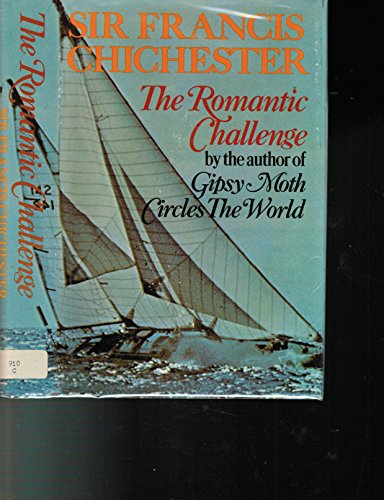 There is in Sir Francis Chichester a restless spirit never satisfied with his achievements. Throughout his adventurous life this quiet Englishman has sought to challenge odds that other, younger, stronger men have declared insuperable. As a pilot, as a yachtsman, as a navigator, even as a man who broke the grip of cancer, Sir Francis has always been a pioneer. Where he has led, others have followed: but when he has triumphed, he has at once sought a new and greater challenge.

This is a book about such a challenge. With the feasibility of long-distance voyages proven beyond doubt—not least by his own remarkable circumnavigation in 1966—Sir Francis turned at once to the next great barrier facing the single-hander, the “speed barrier”, setting himself the staggering target of sailing 4,000 miles between two fixed points on the earth’s surface in 20 days—an average of 200 miles a day whatever the wind, whatever the weather.

In this book he tells of the planning, the calculations and the sheer hard work that in January 1971 led him and Gipsy Moth V to their “starting line” for a race which is the single-hander’s “4-Minute Mile” and Marathon, combined in one gruelling, non-stop, murderous ocean race. This for a man—a unique, incredible man—in his seventieth year, was the romantic challenge.

Aviator and sailor Sir Francis Chichester is best known for being the first and fastest person to sail around the globe single-handedly in The Gipsy Moth IV. Following this achievement he wrote several books and made films about his sailing experiences.

Born in Devon and educated at Marlborough College, Chichester emigrated to New Zealand at the age of 18 and spent ten years in forestry, mining and property development. On his return to England he learned to fly, and in the original Gipsy Moth seaplane he became the first person to complete an East-West solo flight across the Tasman Sea, for which he was awarded the inaugural Amy Johnson Memorial Trophy.

Chichester wrote many popular books on his air adventures, and during WWII he wrote the manual that single-man fighter pilots used to navigate across Europe. In 1964 Chichester published his autobiography, the bestselling The Lonely Sea and the Sky, and was knighted three years later for ‘individual achievement and sustained endeavour in the navigation and seamanship of small craft’.

Chichester used his navigation experience to create a successful map-making company, Francis Chichester Ltd, which today still publishes pocket guides and maps which are sold throughout the world.

This is an account of Francis Chichester's attempt, in 1970 at the age of 69, to sail Gypsy Moth V 4000 miles across the Atlantic from Bissau, Portuguese Guinea in record time.