Items related to And We Shall Shock Them : " British Army In The...

Fraser, David And We Shall Shock Them : " British Army In The Second World War "

And We Shall Shock Them : " British Army In The Second World War " 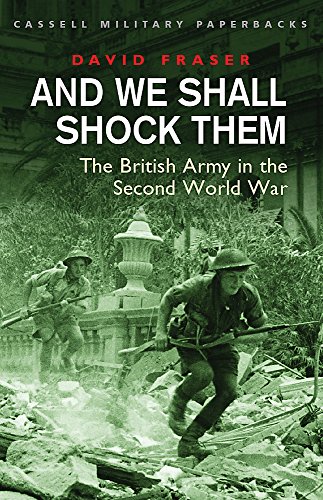 The author brings to life every major campaign fought by the British Army in the Second World War: from the momentous defeats in France, Belgium and the Far East in the early stages of the war, through to the final victories against Germany and Japan in 1945. All aspects of the conflict are described, from grand strategy at the highest levels right down to the experience of infantry, gunners and tankers in the field as the British army battled its way through the war. The book shows how the seeds of World War II were sown at the end of the previous war, twenty-one years earlier, and how successive governments in the twenties and thirties failed to safeguard Britain from the building threat from Germany. It describes how by the beginning of the conflict Hitler's armies were superior in every respect. But as the catalogue of defeats mounted, the British army were learning hard lessons, and painfully acquiring the skills needed to turn the tables. It is therefore a story which moves from triumph to tragedy, and then upward again to triumph at the last.

General Sir David Fraser, G.C.B, O.BE., D.L., served in the war in North-West Europe. He has been Director of Plans, assistant Chief of General Defence Staff and Vice-Chief of the General Staff. Before retiring in 1980 he was British Military Representative to NATO in Brussels and finally, Commandant of the Royal College of Defence Studies in London.

1. AND WE SHALL SHOCK THEM : BRITIS

2. And We Shall Shock Them : British Army in the Second World War (Cassell Military Paperbacks) Fraser, Sir David