Items related to The BFI Companion to Horror

The BFI Companion to Horror

The BFI Companion to Horror 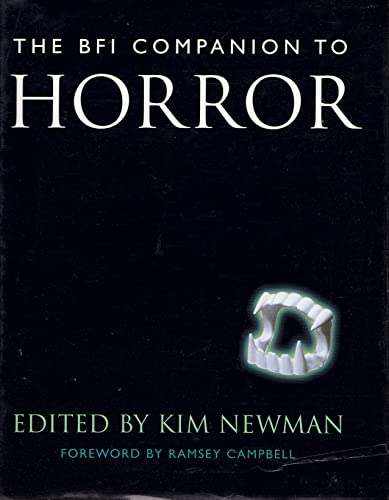 In one volume, the BFI Companion to Horror offers a complete concordance to one of the most lasting genres of popular entertainment, focusing of course on the cinema but also taking in literature, television, radio, popular music, history and folklore. Covering great artists like Boris Karloff and Edgar Allan Poe and humble toilers like Edward D. Wood and John Carradine, this book provides a history of the horror genre from its pre-cinema beginnings in the eighteenth-century gothic novel and the Victorian ghost story through a hundred years of fevered activity, spotlighting not only mainstream horror producers such as Hammer Films and Alfred Hitchcock but also less expected names (Franz Kafka and Ingmar Bergman). In addition to entries on actors, directors, writers and technicians associated with horror, and all horror-themed film and television series, there are insightful essays on classic horror characters like Frankenstein and Dracula, on recurrent situations like decapitation and body-snatching, even on often-horrific portions of the body like eyes and brains. Among the experts who have contributed are Mark Ashworth, Anne Billson, Jeremy Clarke, Christopher Frayling, Neil Gaiman, Phil Hardy, Peter Hutchings, Tom Hutchinson, Alan Jones, Stephen Jones, Mark Kermode, Tim Lucas, Maitland McDonagh, David Prothero, Mark Salisbury, Philip Strick, Steve Thrower and Linda Ruth Williams.

Focusing primarily on the cinema, but encompassing literature, television, radio, popular music, history and folklore, this text provides a secret history of the horror genre from its pre-cinema beginnings in the 18th-century gothic novel and the Victorian ghost story through 100 years of film. In addition to entries on actors, directors, writers, technicians, horror-themed films and television series, the book provides essays on classic horror characters like Frankenstein and Dracula, and on recurrent situations like decapitation and body-snatching.

1. The BFI Companion to Horror

Book Description Continuum (formerly Cassell Academic), 1996. Hardcover. Condition: Used; Good. Dispatched, from the UK, within 48 hours of ordering. This book is in good condition but will show signs of previous ownership. Please expect some creasing to the spine and/or minor damage to the cover. Aged book. Tanned pages and age spots, however, this will not interfere with reading. Ripped/damaged jacket. The dust jacket of this book is slightly damaged/ripped, however, this does not affect the internal condition. Missing jacket. The dust jacket of the book is missing. Seller Inventory # CHL6187128

2. The BFI Companion to Horror

Book Description Continuum (formerly Cassell Academic), 1996. Condition: Poor. This is an ex-library book and may have the usual library/used-book markings inside.This book has hardback covers. In poor condition, suitable as a reading copy. Dust Jacket in fair condition. Please note the Image in this listing is a stock photo and may not match the covers of the actual item,1600grams, ISBN:9780304332137. Seller Inventory # 7317674

Book Description Continuum 1998-06-22, 1998. Hardcover. Condition: Good. Item is in good condition. Some moderate creases and wear. This item may not come with CDs or additional parts including access codes for textbooks. This may not have a dust jacket. Might be an ex-library copy and contain writing/highlighting. Seller Inventory # DS-0304332135-3