Items related to Why Liberalism Failed (Politics and Culture Series) 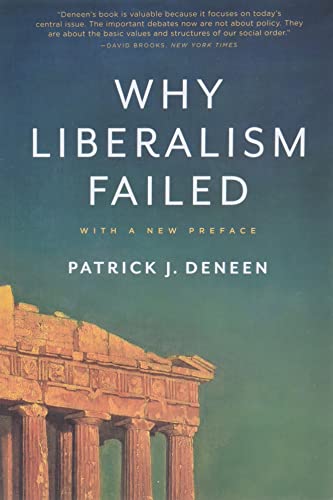 "One of the most important political books of 2018."-Rod Dreher, American Conservative Of the three dominant ideologies of the twentieth century-fascism, communism, and liberalism-only the last remains. This has created a peculiar situation in which liberalism's proponents tend to forget that it is an ideology and not the natural end-state of human political evolution. As Patrick Deneen argues in this provocative book, liberalism is built on a foundation of contradictions: it trumpets equal rights while fostering incomparable material inequality; its legitimacy rests on consent, yet it discourages civic commitments in favor of privatism; and in its pursuit of individual autonomy, it has given rise to the most far-reaching, comprehensive state system in human history. Here, Deneen offers an astringent warning that the centripetal forces now at work on our political culture are not superficial flaws but inherent features of a system whose success is generating its own failure.

"Deneen's book is valuable because it focuses on today's central issue. The important debates now are not about policy. They are about the basic values and structures of our social order."--David Brooks, New York Times
"Bracing. . . . Deneen comes as a Jeremiah to announce that Tocqueville's fear that liberalism would eventually dissolve all [its] inheritances . . . may now be fully upon us."--Ross Douthat, New York Times
"Mr. Deneen has written a serious book offering a radical critique of modernity, and he has taken the trouble to do so both concisely and engagingly. His insights as well as his crotchets in pursuit of his argument are often arresting. He writes compellingly on the growth of government in tandem with the spread of liberal market principles, for example, noting that a supposed preference for 'limited government' has been no match for the demand for expanding government enforcement of individual rights."--Tod Lindberg, Wall Street Journal
"One of the most talked-about books of the moment."--Scott Reyburn, The New York Times
"Why Liberalism Failed offers cogent insights into the loss of meaning and community that many in the West feel, issues that liberal democracies ignore at their own peril."--President Barack Obama
"[Deneen's] exhortations to embrace the local over the global and the cultural over the political are sound and well expressed."--Barton Swaim, Wall Street Journal, Books on Politics: Best of 2018
"Few books challenge the core assumptions of modern liberalism as unapologetically as the suggestively titled Why Liberalism Failed by Patrick Deneen."--Shadi Hamid, TheAtlantic.com
"The most electrifying book of cultural criticism published in some time, and it's hard to imagine its radicalism being surpassed anytime soon."--Damon Linker, Week
"Vitally important for understanding the present crisis in Western politics."--Gene Callahan, American Conservative
"Today is the publication date of Notre Dame political theorist Patrick Deneen's much-anticipated book, Why Liberalism Failed. I read an advance copy of it late last fall, and knew at once that it would be one of the most important political books of 2018. Not just among conservative books, but among political books, period."--Rod Dreher, American Conservative
"This is an essential book as we contemplate the future. Few readers will agree with everything in it, but even fewer will . . . fail to be informed and edified by it. . . . [T]he questions Deneen raises . . . are perhaps the deepest questions about our liberal politics and culture: Can liberalism be saved? Should it?"--Nathanael Blake, Federalist
"Bold and provocative. . . . Why Liberalism Failed takes up the always necessary, increasingly urgent task of locating the deeper intellectual and cultural traditions that shape our everyday lives."--Fred Bauer, National Review
"A timely and radical book."--Samuel Goldman, University Bookman
"Why Liberalism Failed is a sobering look at an ideological turning point in history. It's one of the few books deserving of being called revelatory. It's a rare opportunity for a look at where we're going. If liberalism is indeed on the way out, then it's time to look ahead, past the end of history and beyond."--Medium
"Reading Deneen, I found myself thoroughly engaged, and I wish more books like this would come from the editorial offices of university presses."--Alan Wolfe, Commonweal
"Perhaps the most influential book to emerge so far from this anti-liberal ferment is Patrick J. Deneen's Why Liberalism Failed, published in January by Yale University Press."--Park MacDougald, New York Magazine Daily Intelligencer Blog
"Deneen's masterful study provides a compelling, clear, and scholarly analysis that helps people understand the failure of liberalism. He starts a much-needed conversation about America's post-liberal future."--John Horvat, Imaginative Conservative
"In showing that radical individualism is in the water we drink and the air we breathe, Deneen may spur us to imagine a third way, an alternative that is neither 'liberal' nor 'conservative, ' but more than either."--Anthony B. Robinson, Christian Century
"Why Liberalism Failed is an eminently worthy read. Today's culture wars did not start in the 1960s or '80s. They go back to the Founding, and Deneen offers us a useful doorway into that more difficult conversation."--Jonathan Leeman, Christianity Today
"A persuasive contribution to the ongoing political debate in North America."--David Koyzis and Bruce Ashford, The Gospel Coalition
"I commend Patrick Deneen's Why Liberalism Failed to anyone seeking an honest account of our current political, economic, and cultural predicaments. This book will not confirm the standard conservative narrative of events. However, it will challenge and enlighten any serious reader."--Allan Carlson, Chronicles
"In our apparently transitional political moment, Deneen's book should encourage both Left and Right to reevaluate long-held social, political, and economic assumptions whose time may have passed."--Alexander Stern, RealClearPolitics
"A must read for all scholars who seek to understand the roots of our current, dreary socio-political landscape."--Paul Allen, Reading Religion

"Add to cultural commentary a radical critique of modern political theory's basic assumptions and you have the ingredients for a book more likely to generate cocktail hour banter than seminar debate."--D. G. Hart, Journal of Markets and Morality
"The flame of the Anti-Federalists' position has never been fully extinguished. But not for 160 years has it burned as brightly as it does in Patrick Deneen's Why Liberalism Failed."--Jerome C. Foss, Catholic Social Science Review
Finalist for the Intercollegiate Studies Institute's 2018 Conservative Book of the Year prize, the Paolucci Book Award.
"Liberalism is clearly in everybody's sights, and Why Liberalism Failed will be an important contributor to the conversation, suggesting that we cannot work within the existing paradigm anymore. The philosophers will not solve our problems; working with our neighbors will."--Joshua Mitchell, Professor of Political Theory, Georgetown University
"Deneen writes with clarity, candor and superior scholarship to create one of the most absorbing political philosophy books of the past decade. No one who reads it, no one who considers its substance, will be able to think about the dynamics and the consequences of the American democratic experiment in quite the same way."--Archbishop Charles J. Chaput, author of Author of Strangers in a Strange Land
"This courageous and timely book is a major contribution to understanding the rude awakening in the Trump moment. It shows that we must transcend the death grip of the two oscillating poles of classical liberalism (of Republican and Democratic parties) and examine the deep assumptions that hold us captive. It also reveals that if we remain tied to liberalism's failure, more inequality, repression, and spiritual emptiness await us."--Cornel West, Professor of the Practice of Public Philosophy, Harvard
"Patrick Deneen is a probing and gifted cultural critic, afire with controlled moral passion. Why Liberalism Failed provides a bracing antidote to the pieties of left and right by showing how an impoverished, bipartisan conception of liberty has imprisoned the public life it claims to have set free. One could not ask for a timelier or more necessary enrichment of our depleted political discourse."--Jackson Lears, Board of Governors Distinguished Professor of History, Rutgers University
"A path-breaking book, boldly argued and expressed in terms that might justifiably be called prophetic in character."--Wilfred M. McClay, G.T. and Libby Blankenship Chair in the History of Liberty, University of Oklahoma

Patrick J. Deneen is Professor of Political Science and holds the David A. Potenziani Memorial College Chair of Constitutional Studies at the University of Notre Dame. His previous books include The Odyssey of Political Theory, Democratic Faith, and a number of edited volumes. He lives in South Bend, IN.

Book Description Yale University Press, United States, 2019. Paperback. Condition: New. Reprint. Language: English. Brand new Book. "One of the most important political books of 2018."-Rod Dreher, American Conservative Of the three dominant ideologies of the twentieth century-fascism, communism, and liberalism-only the last remains. This has created a peculiar situation in which liberalism's proponents tend to forget that it is an ideology and not the natural end-state of human political evolution. As Patrick Deneen argues in this provocative book, liberalism is built on a foundation of contradictions: it trumpets equal rights while fostering incomparable material inequality; its legitimacy rests on consent, yet it discourages civic commitments in favor of privatism; and in its pursuit of individual autonomy, it has given rise to the most far-reaching, comprehensive state system in human history. Here, Deneen offers an astringent warning that the centripetal forces now at work on our political culture are not superficial flaws but inherent features of a system whose success is generating its own failure. Seller Inventory # AAH9780300240023

3. Why Liberalism Failed (Politics and Culture)

4. Why Liberalism Failed (Politics and Culture)

Book Description Paperback. Condition: New. Paperback. One of the most important political books of 2018.-Rod Dreher, American Conservative Of the three dominant ideologies of the twentieth century-fascism, communism, and liberalism-only the l.Shipping may be from multiple locations in the US or from the UK, depending on stock availability. 264 pages. 0.270. Seller Inventory # 9780300240023

8. Why Liberalism Failed (Politics and Culture)