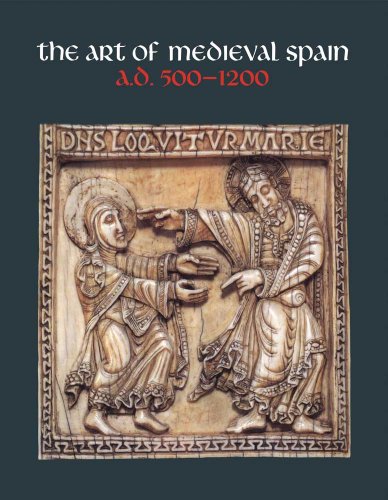 Spanish art of the Middle Ages, a period that has been relatively unexplored in the English-speaking world, is examined here in detail. This publication accompanies a major exhibition for which more than 150 sculptures, architectural elements, paintings, textiles, and objects for everyday and ceremonial use were gathered from museums and private collections in Spain, the United States, Europe, and Africa. Each work is illustrated (most in full color) and is discussed in texts that will be of interest to both the general reader and the scholar.

The volume opens with three essays by leading scholars that traverse the eventful world of medieval Spain, presenting themes that will prove important throughout the centuries from 500 to 1200. The immense influence of topography on Iberian history is limned, and the ongoing impact of Christianity and Islam on the peninsula is discussed in vivid terms. Of great interest is the survey of Spain’s cultural ties to Europe and to the Middle East. This wide-ranging introduction is followed by four sections: Visigothic Spain, Islamic Spain, the Kingdom of Asturias and Mozarabic Spain, and Romanesque Spain. Each opens with one or more distinguished essays, richly illustrated with photographs of architecture and works of art.

About A.D. 500 the Visigoths made their way into the Iberian Peninsula and supplanted the existing Roman polity. Their metalwork and sculpture give a sense of the dislocations of this transitional period. Just some two centuries later the Visigoths were themselves displaced by Muslims who moved from North Africa. The presence of Islam in the Iberian Peninsula has been examined in depth in Al-Andalus, the counterpart to the present exhibition which was presented in 1992 by the Metropolitan Museum. Here the ascendancy of Islam is documented through remarkable sculpture, ivories, ceramics, textiles, and metalwork.

Despite centuries of conflict and turmoil, the inhabitants of Spain?be they Christian or Muslim?left a splendid legacy of artworks. Perceptive essays examine the Christian kingdoms of the north and the extraordinary manuscripts produced by the monasteries established in the frontier territories between the Christian North and the Islamic states of al-Andalus. Included are numerous examples of manuscripts of great beauty and importance. The final section of the catalogue presents the flowering of the Romanesque in Spain. Special attention is given to the art of the Camino de Santiago, the great pilgrimage road, and to the magnificent architecture and wall paintings of Catalonia.

Throughout this publication the reader becomes aware not only of the clash between cultures but also of the less evident intercourse between widely different traditions. Both profound differences and shared artistic forms are brought to the fore. This volume is an essential introduction to an art that repays long study. It signals a new era in English-language studies of the still unfamiliar world of medieval Spain. [This book was originally published in 1993 and has gone out of print. This edition is a print-on-demand version of the original book.]

Book Description Metropolitan Museum of Art, 2013. Condition: Good. Shows some signs of wear, and may have some markings on the inside. Seller Inventory # GRP96489885

Book Description Metropolitan Museum of Art, 2013. Condition: Good. A+ Customer service! Satisfaction Guaranteed! Book is in Used-Good condition. Pages and cover are clean and intact. Used items may not include supplementary materials such as CDs or access codes. May show signs of minor shelf wear and contain limited notes and highlighting. Seller Inventory # 0300200234-2-4

Book Description Metropolitan Museum of Art, 2013. Paperback. Condition: VERY GOOD. Pages are intact and are not marred by notes or highlighting, but may contain a neat previous owner name. The spine remains undamaged. Supplemental materials are not guaranteed with any used book purchases. Seller Inventory # 0300200234_abe_vg