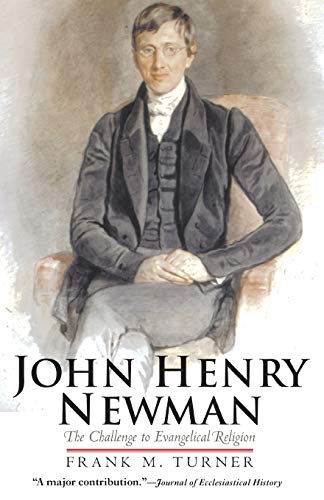 One of the most controversial religious figures of the nineteenth century, John Henry Newman (1801-1890) began his career as a priest in the Church of England but converted to the Roman Catholic Church in 1845. He became a cardinal in 1879. Between 1833 and 1845 Newman, now best known for his autobiographical Apologia Pro Vita Sua and The Idea of a University, was the aggressive leader of the Tractarian Movement within Oxford University. Newman, along with John Keble, Richard Hurrell Froude, and E. B. Pusey, launched an uncompromising battle against the dominance of evangelicalism in early Victorian religious life. By 1845 Newman's radically outspoken views had earned him censure from Oxford authorities and sharp criticism from the English bishops. Departing from previous interpretations, Turner portrays Newman as a disruptive and confused schismatic conducting a radical religious experiment. Turner demonstrates that Newman's passage to Rome largely resulted from family quarrels, thwarted university ambitions, the inability to control his followers, and his desire to live in a community of celibate males.

"'Frank M. Turner's book revolutionises Newman studies... It liberates him from the stranglehold of ecclesiasticism (a stranglehold whose knots he happily tied himself with his silken fingers) and reveals a believable human psyche.' (A. N. Wilson, Literary Review) 'Turner's book is both a powerful and compelling statement about Newman's ideas and development during his formative years, and an indispensable guide to an important chapter in nineteenth-century English history.' (Frederick Quinn, Anglican Theological Review)"

3. John Henry Newman and#8211; The Challenge to Evangelical Religion

7. John Henry Newman and#8211; The Challenge to Evangelical Religion