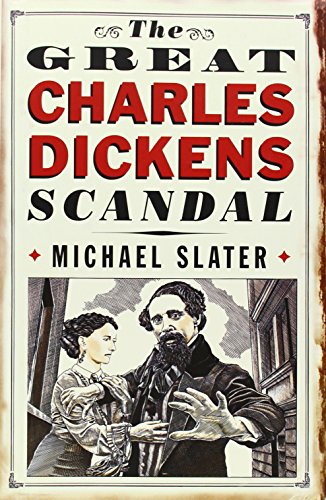 Charles Dickens was regarded as the great proponent of hearth and home in Victorian Britain, but in 1858 this image was nearly shattered. With the breakup of his marriage that year, rumors of a scandalous relationship he may have conducted with the young actress Ellen "Nelly" Ternan flourished. For the remaining twelve years of his life, Dickens managed to contain the gossip. After his death, surviving family members did the same. But when the author's last living son died in 1934, there was no one to discourage rampant speculation. Dramatic revelations came from every corner-over Nelly's role as Dickens's mistress, their clandestine meetings, and even about his possibly fathering an illegitimate child by her. This book presents the most complete account of the scandal and ensuing cover-up ever published. Drawing on the author's letters and other archival sources not previously available, Dickens scholar Michael Slater investigates what Dickens did or may have done, then traces the way the scandal was elaborated over succeeding generations. Slater shows how various writers concocted outlandish yet plausible theories while newspapers and book publishers vied for sensational revelations. With its tale of intrigue and a cast of well-known figures from Thackeray and Shaw to Orwell and Edmund Wilson, this engaging book will delight not only Dickens fans but also readers who appreciate tales of mystery, cover-up, and clever detection.

"A sexy story resting on a bed of comprehensive scholarship and pursued with Sherlock-ian imagination."-Kirkus (starred review) Kirkus "Slater's work is a fascinating investigation into the nature of scandal itself as much as it is a look at the particular episode."-Daily Beast The Daily Beast "Wise, witty and highly entertaining."-Simon Callow, The Guardian -- Simon Callow The Guardian "Strangely riveting, even haunting ... a scholarly detective story."-The Boston Globe The Boston Globe "Impeccably sourced and dashingly narrated ... Slater sinks his teeth into the dirty subject of reputation making-and breaking-with a relish that almost made me forget (I mean this as a compliment) that author's status as an eminent academic."-Miranda Seymour, Sunday Telegraph -- Miranda Seymour Sunday Telegraph "[Slater] examines decades of rumor and journalism to provide a history of the scandal as it has develpped since the author's death."-New Yorker Page-Turner blog New Yorker Page-Turner blog "A fascinating picture of not only Charles Dickens, but of the people who were (and still are) fascinated by him."-PopMatters PopMatters "[Slater] happily tracks down and assesses the tiny accumulating pips and squeaks of the 'scandal.'"-San Francisco Chronicle San Francisco Chronicle "You don't need to know [Dickens's] fiction to enjoy Slater's zesty account of the life."-The New Republic The New Republic "An invaluable work for Dickens scholars, and an enjoyable read for anyone."-Choice Choice "Michael Slater revisits the layers of deception, gossip, commercial speculation, and academic work that grew around Dickens's extramarital relationship with Ellen Ternan in order to track the unfolding of "the great Dickens scandal" from Dickens's own lifetime to ours."-Sambudha Sen, Victorian Studies -- Sambudha Sen Victorian Studies

Book Description Yale University Press, 2012. Hardcover. Condition: New. Dust Jacket Condition: New. 1st Edition. Charles Dickens was regarded as the great champion of hearth and home in Victorian Britain but in 1858 this image was nearly shattered. With the break-up of his marriage in that year rumors about scandalous relationships he might have been conducting with a young actress, Ellen Ternan, or even with his own sister-in-law were widespread. For the remaining twelve years of his life he fought to squash the gossip and largely succeeded. But when his last living child died in 1934 there was no-one left who was in a position authoritatively to reject all damaging allegations. Since then there has been a succession of dramatic revelations about Ellen's role in Dicken's life and the nature of their relationship which may have involved the birth of an illegitmate child. This book presents the most detailed account of the history of this notorious scandal so far published. Drawing on the author's letters and other archival sources, Dickens expert Michael Slater investigates what Dickens did or may have done, then traces the way in which the scandal has been investigated and elaborated on over succeeding generations both by amateur sleuths and by professional writers. With its tale of intrigue and cast of well-known figures including Thackeray, George Bernard Shaw, and Edmund Wilson, this engaging book will fascinate not only Dickens fans but also readers who appreciate tales of mystery, cover-up, and clever detection. Seller Inventory # 000987