Items related to Fighting for American Manhood: How Gender Politics... 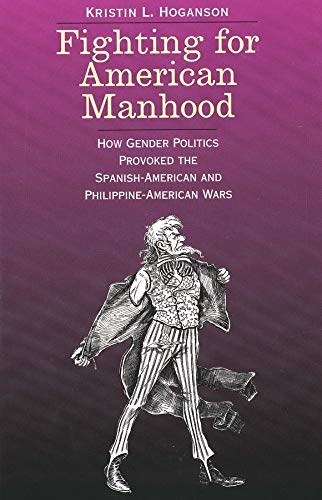 Fighting for American Manhood This study of international relations and gender history reveals how gendered ideas about citizenship and political leadership influenced jingoist political leaders' desire to wage conflicts, and traces how they manipulated ideas about gender to embroil the nation in war. Full description

"A useful addition to any academic or larger public library."--Library Journal

"Hoganson has written a very important book, one that immediately claims the center of the larger debate on late nineteenth century war and imperialism. This is a touchstone work. It is a model of scholarship, driven by passionate argument and sustained by judicious formulation of evidence, carefully crafted and richly documented. Hoganson has expanded the historiography on the war with Spain and its aftermath with a highly original study and in so doing has raised issues that reach far beyond 1898."--Louis A Perez, Jr., American Historical Review

"A brief review cannot do justice to the complexities of Hoganson's intelligent argumentation. Her engaging book should appear on syllabi for both undergraduate and graduate courses. It is a great read."--Robyn Muncy, American Studies

"Hoganson's provocative arguments and careful research add significantly to a growing body of literature that considers the links between gender practices and values, and international relations."--Choice

"A clearly written and lucidly argued study. . . . Fighting for American Manhood is a first-rate scholarly achievement that will be required reading for all who seek to understand the reasons why the United States embarked upon an imperial path at the close of the nineteenth century."--Edward P. Crapol, Historian

"Kristin Hoganson's study of gender and U.S. imperial politics ranks among the most important contributions to the recent wave of scholarship on U.S. empire in the Caribbean and the Pacific. . . . Hoganson's work will remain both an inspiration and a model for understanding the importance of gender politics in U.S. expansion."--Aims McGuinness, Left History

"Kristin Hoganson's Fighting for American Manhood brings the conceptual weapon of gender theory, which is relatively new to diplomatic history, to the fray. . . . Hoganson's account . . . is the most ambitious attempt thus far to demonstrate the importance of gender as a foreign policy explanation. . . . She brings a wealth of impressive research, supported by a splendid selection of illustrations, to the topic. . . . This is one of the most interesting, innovative, and provocative books on the Spanish-American War to appear in the last thirty years. All diplomatic historians will have to come to grips with Hoganson's argument and, one hopes, will profit from doing so. This work should be on any short list of required readings on the causes of the war of 1898 and its imperial aftermath."--Frank Ninkovich, Reviews in American History

"I've read this book with great interest and, in fact, kept stopping to make notes, provoked into new thinking by Kristin Hoganson`s juicy research and insightful analysis."--Cynthia Enloe, author of The Morning After: Sexual Politics at the End of the Cold War

"Kristin Hoganson's important book is a pioneering, imaginative, and provocative analysis of a pivotal era in American history. In the widening discussion over the roots of modern U.S. foreign policy, it will be a work that cannot be ignored-- in part because of a spirited debate over its innovative approach."--Walter LaFeber, Cornell University

Book Description Yale University Press, United States, 2000. Paperback. Condition: New. Revised ed. Language: English. Brand new Book. This groundbreaking book blends international relations and gender history to provide a new understanding of the Spanish-American and Philippine-American wars. Kristin L. Hoganson shows how gendered ideas about citizenship and political leadership influenced jingoist political leaders` desire to wage these conflicts, and she traces how they manipulated ideas about gender to embroil the nation in war. She argues that racial beliefs were only part of the cultural framework that undergirded U.S. martial policies at the turn of the century. Gender beliefs, also affected the rise and fall of the nation`s imperialist impulse. Drawing on an extensive range of sources, including congressional debates, campaign speeches, political tracts, newspapers, magazines, political cartoons, and the papers of politicians, soldiers, suffragists, and other political activists, Hoganson discusses how concerns about manhood affected debates over war and empire. She demonstrates that jingoist political leaders, distressed by the passing of the Civil War generation and by women`s incursions into electoral politics, embraced war as an opportunity to promote a political vision in which soldiers were venerated as model citizens and women remained on the fringes of political life. These gender concerns not only played an important role in the Spanish-American and Philippine-American wars, they have echoes in later time periods, says the author, and recognizing their significance has powerful ramifications for the way we view international relations.Yale Historical Publications. Seller Inventory # AAC9780300085549

Book Description Paperback. Condition: New. Paperback. This groundbreaking book blends international relations and gender history to provide a new understanding of the Spanish-American and Philippine-American wars. Kristin L. Hoganson shows ho.Shipping may be from multiple locations in the US or from the UK, depending on stock availability. 320 pages. 0.449. Seller Inventory # 9780300085549

8. Fighting for American Manhood: How Gender Politics Provoked the Spanish-American and Philippine-American Wars

9. Fighting for American Manhood : How Gender Politics Provoked the Spanish-American and Philippine-American Wars