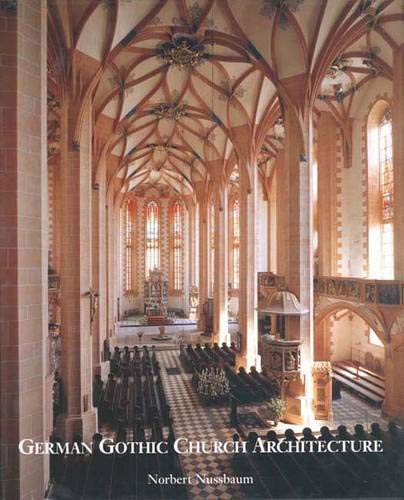 This wide-ranging book provides for the first time a complete view of German Gothic church architecture. Architectural historian Norbert Nussbaum surveys church construction from the early thirteenth to the early sixteenth century in the German-language regions of medieval Europe. These areas of the Holy Roman Empire, including Bohemia, Austria, northern Switzerland, Alsace, Silesia, and East Prussia, were hereditary fiefdoms at the time, and their diverse cultures contributed to the extreme variety of German Gothic. Nussbaum looks at this rich period of architectural history from many perspectives and offers an informative tour of dozens of German Gothic churches, spectacular for both their beauty and variety. Soon after the Gothic first influenced German builders in the thirteenth century, it developed in several directions, as Nussbaum shows. The differences are reflected in the great cathedral lodges of Cologne and Strasbourg, the conscious poverty of form expressed by the Mendicant orders, and red brick churches on the North Sea and Baltic coasts. A fourteenth-century synthesis of these styles was at last achieved in Prague Cathedral, the only great church financed by a German Emperor, Charles IV. In the fifteenth century, German Late Gothic style, unlike the monarchy-supported style of Germany's neighbours to the west, evolved as cities undertook the financing of parish churches. This period of design culminated with the construction of large hall churches, characterised by high, sculptured towers and audacious, sometimes fantastic vault structures, which remained a mark of great church architecture throughout the sixteenth century.

Norbert Nussbaum is university professor and holds the chair for architectural history at the University of Dortmund, Germany.

Book Description Yale Univ Press, New Haven, 2000. Hard Cover. Condition: New. Dust Jacket Condition: New. If you cannot get to Germany posthaste, this book will do beautifully. This reviewer and his wife spent the last three Spring seasons pilgrimaging throughout the former Holy Roman Empire visiting most all the churches represented in this volume. Get it for yourself, and/or as a gift. You will flat-out rejoice. Size: Quatro. Seller Inventory # 002180